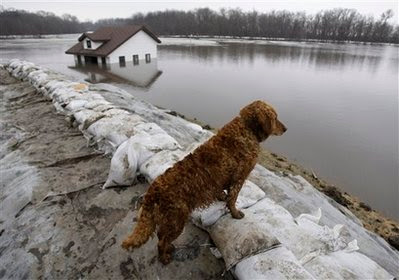 THIS IS AT FARGO - ANNIE THE DOG SURVEYS
HER ONCE-DRY FARMYARD
**********
National attention has been focused on the imminent flooding in Fargo, but for the first time since Garrison Dam was built in the 1950s, the southwest part of the city of Bismarck is being flooded by the Missouri River. People living in the Southport and Fox Island areas were evacuated yesterday.
Also for the first time ever, the US Army Corps of Engineers has completely cut the flow of water from the Garrison Dam, upstream from Bismarck. However, the results will not be noticed in Bismarck for another two days.
About an hour ago this morning, a huge ice jam at Double Ditch north of Bismarck broke, which is not good news. Authorities had hoped that the jam would not break until they could blast another jam further south with dynamite. Conditions were not good for inspecting the situation by air earlier this morning, but now a Black Hawk helicopter is patrolling the river. (We can see the river from our office building.)
Don't worry about me - both my work and my home are high and dry and safe. I'll keep you informed with another post and more photos this evening.
Posted by Julie at 9:07 AM

Oh that photos tell is all- I am so sorry to hear that you folks are going through such a perilous time. Please know my thoughts and prayers are with you all -
Keep us updated -

At least it sounds like they are trying to limit the flooding and not wait until everything is under water.
Let's hope and pray that there isn't much more damage.
Hugs, Susan

I hope the floods pass without too much damage to folk, their property and of course the wildlife.

I sent you an email earlier. I'm so relieved to hear that you're ok and not in any danger. I'll be thinking of you and all the other people in Bismarck and hope that it doesn't get any worse.

That's terrible Julie, I'm glad that you at least are safe from the flooding. It's devastating for the people who have their homes inundated with flood water, it can take months to clean it all up afterwards. Is it snow melt that is causing the floods?

Oh that is awful, is rather sad to see him looking there, and all those people and their homes.

I've been listening to the news. So glad to hear that you are Okay! Unbelievable!!!

I emailed from work as I had just heard a news report on the radio about ND. If I had come here first I would have been reassured that you were okay.
I hope the floods won't be too catastrophic, and everyone will be safe. Floods are horrible, dirty events, and hopefully it won't get any worse.
hugs
x

My prayers are with you,and all that you love and love you. It seems like everytime we turn around nature is having it's way with us. My heart goes out to you, glad to know that you are safe, but sad that you are going through this time. I pray for the people of Bismarck, I really had no idea about this until the news tonight.
You know that I love you,
Take care, Mary