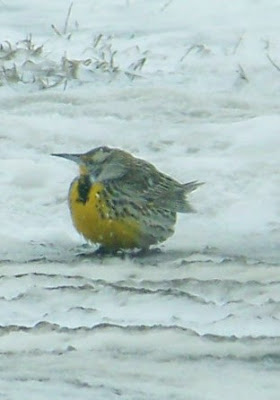 FIRST MEADOWLARK OF THE SEASON

This poor little meadowlark came back to ND too early and when she got here she received a cruel greeting: "April Fool from Mother Nature and Old Man Winter".

Those words have certainly stuck with me. Sometimes lately, as I have been pulling myself out of a snowbank, or watching the bills mount up, or being cut back to two days of work a week, I think that my life is spinning out of control.
But I, too, can concentrate on what I can control. And for me, that's my attitude. So I am thinking positive, and I am thinking spring. And that attitude is not only going to be reflected in my life, but in this blog. I changed my banner this morning, and my Picture of the Month. I am going to write posts about Easter, and spring, and happy things for a while. (I do know that a lot of you have been following our situation, and if our "under control for the moment" changes, I will let you know.)

Since April is National Poetry month, I have found some poems to share about April and/or spring.
Like us, New England poet John Greenleaf Whittier has experienced a spring that's not spring-like:
**********
" 'This the noon of spring-time,
Yet never a bird In the wind-shaked elm or the maple is heard;
For green meadow-grasses wide levels of snow,
And blowing of drifts where the crocuses should blow;
Where wind-flower and violet, amber and white;
On south-sloping brooksides should smile in the light,
O'er the cold winter-beds of their late-waking roots
The frosty flake eddies, the ice crystal shoots'
And, longing for light, under wind-driven heaps,
Round the boles of the pine-wood the ground-laurel creeps,
Unkissed of the sunshine, unbaptized of showers,
With buds scarcely swelled, which should burst into flowers!"
-John Greenleaf Whittier, "April"
**********
And sometimes spring's a mess, especially if you have dogs:
**********
"You can always tell it's April
By the sound of falling rain
That mystic, mournful music
As it trickles down the drain.
We're told that we should be thankful
For the kiss of April showers
As it washes all the grass clean
And prepares the soil for flowers.
There's another side to April
Which doesn't bode us good,
When that mini, manic maelstrom
Turns the lawn to liquid mud."
- Thomas Vaughan Jones, "O' To Be in April"
**********
It's not spring yet here, but I can dream:
**********
"Once a day and sometimes more
I look out my daydream door
To see if spring is out there yet
I'm really anxious, but mustn't fret.
I see the snow a melting down
and lots of mud and slush around
I know the grass will surely sprout
and birds and flowers will come about.
But why oh why does it take so long?
I'm sure the calendar can't be wrong.
Sunshine fills my heart with cheer
I wish that spring were really here."
- Edna T. Helberg, "Longing for Spring"
**********

Some may think, as did T. S. Eliot, that:
**********
"April is the cruelest month, breeding
Lilacs out of the dead land, mixing
Memory and desire, stirring
Dull roots with spring rain."
- T. S. Eliot, "The Waste Land"
**********
When meadowlarks come back to ND too early, they probably think April is the cruelest month - or do they?
**********
"Meadowlarks
give lusty cheers
when spring appears
when spring appears"
Buds and seeds
prick up their ears
and blades of grass
show eager spears.
And only icicles
weep tears
when spring appears
when spring appears."
- Aileen Fisher, "When Spring Appears"
**********
This poem reflects my attitude about a North Dakota spring:
**********
"When March goes on forever,
And April's twice as long,
Who gives a damn if spring has come,
As long as winter's gone."
- R. L. Ruzicka
***********
And then, all of a sudden, it happens!
**********
"April comes like an idiot,
babbling and strewing flowers."
- Edna St. Vincent Millay
**********
"Hark, I hear a robin calling!
List, the wind is from the south!
And the orchard-bloom is falling
Sweet as kisses on the mouth.
In the dreamy vale of beeches
Fair and faint is the woven mist,
And the river's orient reaches
Are the palest amethyst.
Every limpid brook is singing
Of the lure of April days;
Every piney glen is ringing
With the maddest roundelays.
Come and seek together
Springtime lore of daffodils,
Giving to the golden weather
Greeting on the sun-warm hills."
- Lucy Maude Montgomery, Spring Song.
**********
"This I saw on an April day:
Warm rain spilt from a sun-lined cloud,
A sky-flung wave of gold at evening,
And a cock pheasant treading a dusty path
Shy and proud.
And this I found in an April field:
A new white calf in the sun at noon,
A flash of blue in a cool moss bank,
And tips of tulips promising flowers
To a blue-winged loon."
- James Hearst - "In April"
**********
"Winter's done, and April's in the skies,
Earth, look up with laughter in your eyes!"
- Charles G. D. Roberts, "An April Adoration, 1896"
**********
Someday, someday I hope to see spring in England, too:
**********
"Oh, to be in England
Now that April's there,
And whoever wakes in England
Sees, some morning, unaware,
That the lowest boughs and the brushwood sheaf
Round the elm-tree bole are in tiny leaf,
While the chaffinch sings on the orchard bough
In England - now!
And after April, when May follows,
And the whitethroat builds, and all the swallows
Hark! where my blossomed pear-tree in the hedge
Leans to the field and scatters on the clover
Blossoms and dewdrops - at the bent spray's edge
That's the wise thrush; he sings each song twice over,
Lest you should think he never could recapture
The first fine careless rapture!
And though the fields look rough with hoary dew,
And will be gay when noontide wakes anew
The buttercups, the little children's dower, -
Far brighter than this gaudy melon-flower!"
- Robert Browning
**********
True, it may not be spring here yet, but I am keeping spring in my heart:
**********
"The roofs are shining from the rain,
The sparrows twitter as they fly,
And with a windy April grace
The little clouds go by.
Yet the back yards are bare and brown
With only one unchanging tree---
I could not be so sure of Spring
Save that it sings in me."
- Sara Teasdale, "April"
Posted by Julie at 8:07 AM

Julie, I love the quote about control - I have copied that in my little book of quotes. And I love your attitude! I feel we all need to be "aware" of the world around us and certainly to help when we can, but to carry the spirit of a great attitude for all to see- that's where we can make a difference!
Happy Spring day to YOU!

What a beautiful post. Thank you. You've given me food for thought.

Where I come from, we call that "the attitude of gratitude".

You are in my thoughts and prayers. I hope all goes well.

P.S. I shared a link to this post today over at Spiral Steps online support group:
http://health.groups.yahoo.com/group/spiral-steps/

Julie, you are always an inspiration to me. I love the quote and will save it to read over again.

If Spring isn't coming to you then just make your own!! The banner is pretty and looks very spring-like.

In life we find words that bring wisdom. It is hard to stand up tall when all is falling around you, but for every thing there is a season, and this too will pass. You are a very good and strong lady, and I too will remember this quote.
I look forward to all your Easter sharings. I am here, Mary

Love the poems - and the new banner - and the attitude - you always bring me up from my "how come winter is still here and it should be Spring" spiral.

Sorry about the cut back at work - I had the same thing - lost half my hours just over 6 months ago and it is finally catching up with us - ouch!!!

Poor little meadowlark - I hope she survives, food will be hard to find in your present conditions. Our English spring has arrived at any rate, new leaves coming on the elder and hawthron, daffodils everywhere and the occasional burst of warm sunshine followed by days with a sharp wind. I love Brownings poem - it often is like he describes in an English spring. Close your eyes and pretend you're here:)

Wonderful poems. I love your well-chosen optimism...if positive thinking can help bring better days, you are well on your way!

I love those words that were said, have heard them before when tough times have come, well done you thinking positive thoughts, they will pass one. hope you are ok though, take care fiona

One thing for sure when the going gets tough people do band together to help each other. Really renews faith in humankind, taking control of what they can!
Love that you included all the bittersweet but hopeful poetry.

That is certainly something for me to take to heart and think about. Thank you Julie!