THE FIRES OF BELTANE 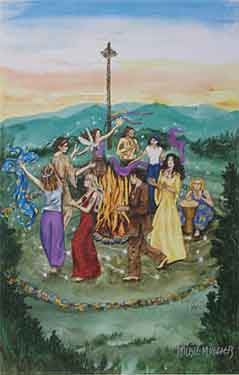 "DANCING THE CIRCLE" by Mickie Mueller
(The following is re-printed from
my blog post of 4/30/2007)
**********
Tonight is the Eve of Beltane, one of the two most important Celtic festivals of the year, or, as you probably know it, May Day. It is properly observed from sunset April 30 to sunset May 1.
On Beltane (or Beltaine) Eve and its counterpart, Samhain Eve (or Halloween), the veil between the two worlds is at its thinnest. But unlike Samhain, when spirits of the dead roam the world, on Beltane Eve it is the fairies who are returning from their winter respite, carefree and full of fairy delight and mischief. Beware, tonight the Queen of the Fairies will ride out on her white steed to entice humans away to fairyland. If you hear the bells on her horse, turn your face away, or she may choose you! 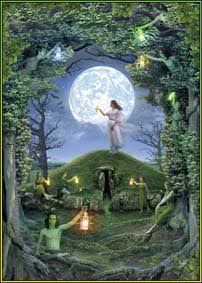 "BELTANE" (artist unknown to me)
**********
More properly, Beltane is a Gaelic festival, celebrated by those in Ireland, Scotland, and the Isle of Man. (Other Celts, like the Welsh, had similar celebrations). The name Beltane means bright fire, bale fire, or Fire of Bel (Bel or Belinos being the Sun God). Halfway between the vernal equinox and the summer solstice, this day marks the beginning of the bright half of the year.
Preparations for Beltane began with gathering flowers for the Maypole and for wearing on the body and in the hair. Young men went May boughing or May birching, gathering garlands of hawthorn (Mayflower) and rowan (mountain ash) to hang over doorways and windows. On the Isle of Man, the youngest child of a family would gather primroses to throw against the door of the house for protection. 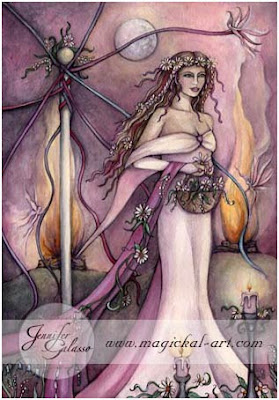 "THE FIREST OF BELTANE" by Jennifer Galasso
**********
From the woods, villagers gathered nine different types of sacred wood. From this wood, two giant bonfires, or need fires, were built on top of a hill. The villagers drove domestic animals between the two fires to purify and protect themselves and the animals, insure their fertility, and bring luck. People also jumped over the bonfires (hopefully after they had died down a bit) in a fertility ritual. In Scotland, boughs of juniper were added to the fire for purification and blessing.
The Beltane celebration honored life over death and celebrated the rebirth of the world. Above all, it was a fertility festival, a symbolic union of the God and Goddess, of the divine masculine and the divine feminine. A young virgin, often dressed in white with a crown of flowers, was chosen to be the Queen of the May. Her consort went by many names, including the Green Man, the May Groom, the May King, and Jack-of-the-Green, often dressed in green and decorated with leaves. 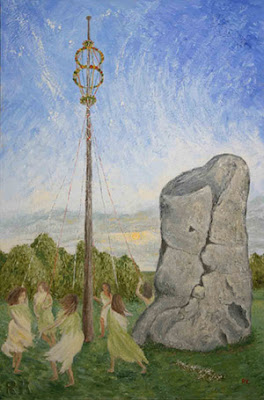 In Scotland, bannocks (or oatcakes), were passed around in a bonnet. One bannock had been blackened by the fire, and the person choosing the blackened bannock became The Fool. It was the hope that all misfortune would henceforth fall on The Fool and no one else. Poor Fool, he also had to jump over the bonfire three times.
After the fires died down, the youth of the village would slip into the woods to go "A-Maying", to act out in reality the symbolic joining of the God and Goddess. No wonder they sing about "The Lusty Month of May" in "Camelot". 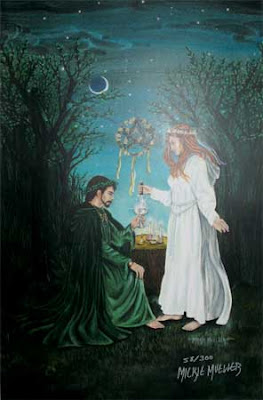 "BELTANE GROVE" by Mickie Mueller
**********
May Day morning, the young people would emerge from the woods, perhaps mussed and disheveled, to dance around the Maypole, gaily decorated with colorful ribbons, flowers, leaves and garlands. Flowers were put in baskets and left on doorsteps for those who were too ill or too old to participate in the festival. From that, we get our modern day May baskets.
Beltane was serious business for the Celts. They believed that the wheel of the sky would not turn without their intervention, and they did everything in their power - with their fires, celebrations and rituals - to ensure that summer returned each year.
Beltane was celebrated in English villages up into the 1950s. The festivities came to include mummers' plays, Morris dancing, riding the hobby horse, feasting and drinking. Tonight, the Beltane Fire Festival on Colton Hill in Edinburgh, Scotland, will attract 12,000 to 15,000 people. 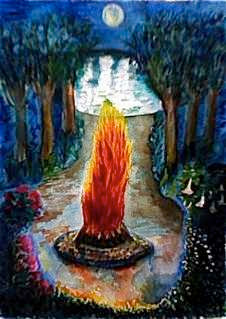 There will be no May bonfires for me tonight here in Bismarck, and certainly no creeping into the woods to go "A-Maying." Instead, I will play "Huron Beltane Fire Dance" by Loreena McKennitt a number of times. Since I can never listen to this music without dancing, I'll do a little springtime dance of my own. Beltane comes only once a year!
**********
"Huron Beltane Fire Dance" is on McKennitt's "Parallel Dreams" CD. Here is a video of Michael Flatley and the Lord of the Dance cast dancing to it:
http://www.youtube.com/watch?v=zEBZP2SWsww&NR=1
**********
Today is "National Poem in Your Pocket Day". For more information, to to Carol's blog at "Charli and Me": http://www.charliandme.blogspot.com/
**********
Joann from Washington, who writes the "Pieceful Afternoon" blog, is going through a tough time right now. Her beloved husband, Don, has to have open heart surgery this fall and they have to raise $25,000.00 BEFORE he can have the surgery. They have come up with a way to help defray the expenses. Joann is raffling off one of her beautiful quilts, and her friends have contributed other hand-made items. Please check this out here: http://piecefulquillting.blogspot.com/
***********
I don't think I'm going to be around much for a while. I do not have home Internet at the moment (withdrawal is hard), and they charge 25 cents for each 15 minutes you use it at the library, so posting and commenting are going to plummet. I will, however, be checking my e-mails so you can keep in touch that way. Please don't forget me when I'm gone!!!
Posted by Julie at 8:10 AM

Lovely Beltane post Julie - it's a wonderful time of the year. You've chosen some lovely art work too. Hope you won't be gone for too long - and hope your posts about the fair people are going to continue eventually. Also must say that I love the art work in your sidebar.

i will check on your friend Joann

LOvely lovely post - always so interesting. I definitely want summer to return. Today is gorgeous here - and thanks for the note about our donation quilt. We really appreciate you!!!

dear julie, i do apologise so for mis-spelling your name!! thats what comes of posting a blog in the late/early hours of the morning! have now rectified this!! i love this oh so informative post & hope you dont mind am linking to it from "faeritale of inspiration". we will miss you whilst you are away, but we wont forget you & will wait your return with great expectations (that are always met) x x

Great post, with everything at home this week, i'd forgotten it was Beltane - i'll light a candle later, maybe the fairy queen will wisk me away, sometimes i wish she would!

So glad you mentioned Loreena McKinnett. She will provide the perfect music for Beltane.
I will dance tonight too.
Blessed Betane dearest Celtic Lady.
xx

I will miss you, and will be waiting for your return.
Big Love, Mary

JUlie I so enjoyed reading this! The illustrations are wonderful!You my dear lady we could never forget! See you by email! xo NG

Another wonderful post. You always teach me new things, and I love the art you choose. The one by Jennifer Galasso is my favorite one here.

I'm sorry you won't be around Blogland for awhile but we could never forget you!! Just hurry back when you can.

I'm SO happy I found your blog this morning. I enjoyed reading this post. It was very educational to me and will be back for more.

Julie, You write the most amazing posts. Thank you! This was so interesting and I loved that you included the video. I have always liked Loreena McKennitt too. Thank you for mentioning my blog. I hope you don't stay away to long ♥

i love all the old tradtions re: May 1st.

It is my daughther's birthday, I think it marks a lot of good sunny weather and good energy(though it is cool and rainy here now!).

I love your "May painting"...so romantic!

I quite like looking through an article that will make men and women think.
Also, many thanks for permitting me to comment!