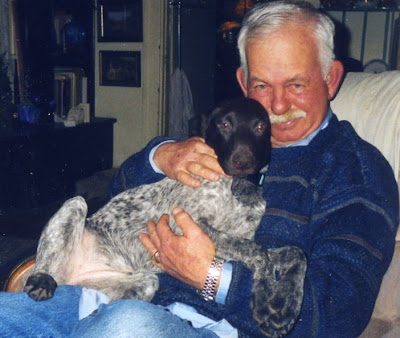 DAN WITH GRACIE
**********
Happy Birthday to my husband, Dan, who turns the big 6-0 today. As blogging friend Gemma says, that officially qualifies him to be an Old Fart! Or, you could say he is older than dirt!
On Dan's big 4-0, we had just driven across North Dakota and half of Montana in 100-degree heat to attend his niece's wedding. His mom baked him an angel food cake with butter cream frosting, and brought it all that way in the heat, but other than that, his celebration was overshadowed by the wedding.
On his big 5-0, I was spending a week in Boise, Idaho, with said niece and her family. Word has it that he celebrated quite well without me. Fortunately, his watering hole was close enough so that he could walk home after his revels.
On his birthday four years ago, he took one of his few days off to go golfing at one of the prettiest spots around, the Painted Woods golf course near Washburn, ND. Unfortunately, I had to have him reached with an emergency message, that our daughter was critically ill in Washington, DC.
Today, he took another of his rare days off to try to have that golfing/birthday celebration at Painted Woods. This time, there was no emergency call and he was able to spend a balmy day in the great outdoors with his best buds.
We're not ones for having parties, so we're just going to have some pizza and beer tonight.
Happy Birthday, Dan, and many more. But of course that means that in less than 365 days I will be the big 6-0. Yikes!
Posted by Julie at 5:38 PM

www- happy birthday Dan! Anybody with that great a smil AND a dog - well you know I'm hooked! I'll be 59 this year and plan on getting a tatoo on my 60th - :-)
Colleen

Happy Birthday to Dan! Hope he enjoys many more!!!I know you don't want to trade him in for two
30year olds!
:-)

Happy Birthday Dan! Good to hear that he was able to go golfing today with no interruptions:-) Wish I could come over for pizza! hehe xoxo

Take Dan to see Mamma Mia....it makes all of us feel like kids again!!!!

Happy Happy Birthday to Dan. Glad he had an uneventful day this year. Love Hugs and Blessings

Happy Birthday, Dan! Hope it's a great celebration. I'm keeping your girl in my thoughts. Hope all is well.

Happy Birthday Dan!
Sounds like he had a good one.
We are not much party people either, pizza and beer is perfect.

A very Happy Belated Birthday to your dear Dan. I hope his 60th year brings him all good things.

All the best to you too Julie.

Belated Birthday Greetings to Dan, sounds like he had the best day *!*

he looks like a lovely soul.. so good for them to have a day with their friends, playing golf... they deserve it!
a happy birthday to him!!

What a blessing to be turning 60 and have a life full of love. Birthday Blessings to Dan!

Oh my gosh, Julie, did I miss your birthday?
I'm not good w/math but if you have less than 365 days left...
Anyway, happy, happy day to Dan!!
Sounds as if it was a great day for him. Where does the time go? Dave turned 60 in April and I still maintain 60 doesn't look like what it used to.
Happy Day!
glad you liked the Cassatt!!

A very Happy 60th Birthday to Dan! Glad he had such an enjoyable day.
Enjoyed your Lughnasagh post by the way.

Happy Birthday Dan! Oh that Gracie is a cutie.

Glad to hear Dan had a great day today doing something special that he likes...with no emergencies and such!
Tell Dan Happy Birthday and that.....I'm wishing him a WONDERFUL, prosperous, healthy, and happy year ahead!
Hey aren't they saying that "60 is the new 40???"
Hummmm......
Your friend,
Joyce M.

Awwww....now that is a sweet photo..showing the softer side of your man! Happy birthday to your Dan!
I also have one of those so called
"Old Farts"..wishing Dan a wonderful day!hugs NG

Happy Birthday Dan....I think your wife is one special lady. And I love the picture, I think you and my Arney would get along fine....he has a great love for his pets.
Hugs, and many more, Mary

Happy B-Day Dan..
I turn the big 6-0 this Januaray...so you are not alone, LOL
Hugs Patty

Happy Birthday to your Dan, Julie!

Well, I am way late per usual. Happy Birthday, Dan!!