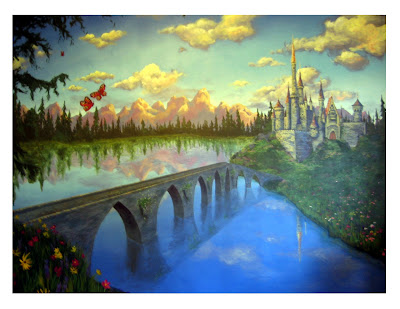 On this long weekend that marks the end of summer for those of us in the U.S. and Canada, I'm thinking back over the summer of 2008. It was one of the best and fairest of summers, weather-wise, that I can remember.

I'm reminded of the song "Camelot" from the movie of the same name: "A law was made a distant moon ago here - July and August cannot be too hot. By order summer lingers through September, in Camelot."

And: "The rain may never fall 'til after sundown, by 8 the morning fog must disappear. In short there's simply not, a more congenial spot, for happily-ever-aftering than here in Camelot." Once the three weeks of constant rain ended in mid-June, it's been oh-so pleasant.

Here in Bismarck, it never once reached 100 degrees, much less topped it. That's unusual for the Northern Great Plains. I myself have seen it get to 113 degrees. Even on days when it reached the 90s, the evenings cooled down most comfortably. When it did rain, it usually was at night, just like in Camelot.

The tornado sirens only went off once all summer. Unusual? - you bet! We only had one rip-roaring thunder, lightning and wind storm. Unusual? - uh huh! We had no hail at all. Unusual? - absolutely. We never once turned on our air conditioner. Unu--oh, am I wearing out that word?

Here are some substitutes: It was a summer of spring zephyr breezes. It was moderate, balmy, temperate, blissful, languorous. Even the West-Nile-virus-carrying culex tarsalis mosquito went away somewhere. The c.t.s represented only 4% of mosquitoes found in traps, and the reported cases of West Nile were down by 4/5ths from last year.

This summer also reminded me of what I have read about the weather in England the summer of 1914, "The hot, sun-drenched gorgeous summer of 1914; the most beautiful in living memory. It was remembered as a kind of Eden." Writer Stefan Zweig remembers that he "had rarely experienced a summer more luxurious, more beautiful and, I am happy to say, more summery."

A summery summer. Yes, that's what we've had here. The essence of all summers, with all of the good and little of the bad. I savored every day of this summer, from early in the cool mornings to late into the evenings.

But we remember what happened in both Camelots - ancient and modern. And at the end of the summer of 1914, the guns of August began booming, signaling the start of the Great War. I certainly hope that the summer of 2008 does not portend anything bad coming in the fall!

NOTE ADDED LATER: I have deleted an ending sentence in this post, and any comments referring to that sentence will not be shown.
Posted by Julie at 10:11 AM

I'm glad you had a good summer on your side of the pond, ours has been a bit of a wash out :-)

It has been hot in Alabama, although I have seen it hotter. We got some rain too, which was needed. I have been seeing some leaves changing here and there. I love the autumn, so good bye and good riddance to summer with its heat and humidity.

cant say we've had much of a summer here in SW england. but everywhere is so beaitiful and verdant from all the rain nourishing the earth...

Our summer has been wet, but with enough hot sunny days to make is bearable.
Camelot..
I saw the stage production many years ago, with Richard Burton. I was so looking forward to it, but he was wooden, and not at all like he was in films.
Quite disappointing.

I like where I live...often think of it with the Camelot lyrics!
This has been our coolest August in my memory...and 12 inches ahead on rain. I didn't have to drag the hose around at all!
I love the musical...thanks for the reminder!

Autumn, the season of preparation for rest and renewal, as Pat said. I like that! {Pat at 'Back Porch Musings'}

dearest Julie AnamCara,
Hope you had a lovely weekend. You have been on my mind alot since I worked in your book this weekend. You won't be getting it for a few weeks though.
love
:-)

Sounds like you had a wonderful summer Julie, enjoy your autumn/fall.
It's spring here now.

No Camelot here this summer! Hot hot hot and no rain to speak of. I think we had a drizzle one day but that's it. I'm glad you had a great summer though. Let's all have a fantastic Autumn.

I can just hear Richard Harris singing that song. Oh what a lovely movie that was..... Thanks for the memories.

We went from very hot to warm and cool nights. I think we could have a early winter....it is hard to know what it will do here in Ole Idaho....I love fall, the air is fresh and clean. But why I think it could be a early winter is the birds have left, just a few left.
It has been a good summer, but not wonderful...I didn't do half the things that I planned.
Happy fall, Mary

Julie I'm so happy for you that the Summer weather was almost perfect. I wish it had been cooler here - the heat and lack of rain has been unbearable, for us and the gardens.

Now we're into scary hurricane season - however Fall is around the corner and I hope to enjoy it for a brief time later this month before going away.

Hope all is well with you and the family.
Hugs - Mary.

our summer has been very different from others. Not hot at all!
I don't like hot weather but i also don't like when this happens because it means something not so good can happen.
Since the begining of July has been mid 70's to very low 80's and of course, as almost every summer no rain, so what is going to happen is another firestorm unfortunately.
I am hoping my favorite celtic lady is doing great and is all healthy ;-)

I fixed the address Julie. I don't know why, but I sure was wrong. Maybe it's all these tomato's I have been knee deep in?????? We are giving them to anyone that will take them. Today we sundried another pile. I will be giving them out for Christmas.
I am so glad that you liked what I did with the Challenge...you might try it....it's fun!
Hugs, Mary