MICHAEL PHELPS IS A MERMAN! 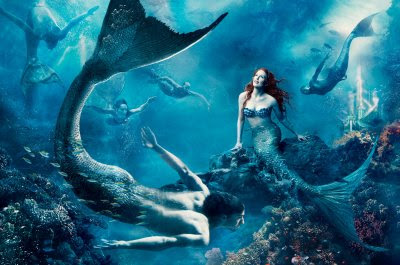 I haven't been watching the Olympics this summer. All I did was follow the exploits of Michael Phelps. Yeah, Michael!

I did catch a segment of one of his races in which he was doing a "stroke" that involved holding his arms back by his sides, keeping his legs and feet together and undulating his body like a fish to propel him through the water. Like a fish, I tell you!!

I was astounded. Michael Phelps, I thought, is a flippin' merman!

Then, a few days later I was browsing the web and found out that he is for sure a merman. Famed photographer Annie Leibovitz must have seen him do the same swim move that I did, because she picked him to be in her "The Little Mermaid" shoot for a series she is doing for Vanity Fair called "Disney Dream Portrait Series". (PS - Julianne Moore is Ariel.)

Look at them in the photo above. Yes, it's a photo, not a painting, and they are accompanied by other well-known swimmers in the background. 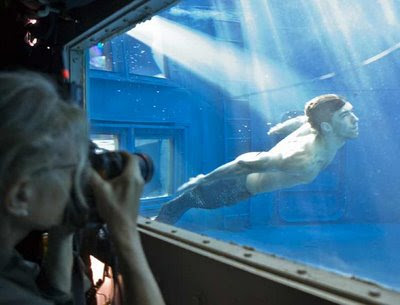 LEIBOVITZ PHOTOGRAPHING PHELPS IN A
TANK WITH AN UNDERWATER WINDOW.
Here's what the article said, in part: "Fitted in his silvery fishtail, Phelps was lowered into a backlot tank in Los Angeles used for underwater movie scenes. Leibovitz was on the outside, snapping away, communicating her instructions to Phelps via members of her crew.

"One of the most complicated shots I have ever done," said Leibovitz. "I didn't know if it was going to work, what to expect. I have to tell you, he was beautiful. Michael put on that tail and ... he just became like a modern dancer. He just took to it and enjoyed himself and swam through this tank. I was blown away."

She adds, "His movements were so graceful and beautiful you just felt like you were watching a real merman." 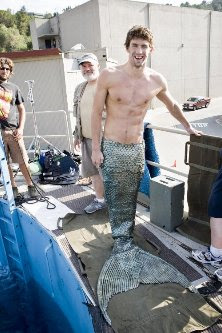 MICHAEL PHELPS DOESN'T NEED
FAKE FINS TO BE A MERMAN!
**********
Doing some more research, I found this on Wikipedia (I bolded the relevant quotes:):
"Five physical attributes particularly suit Phelps to swimming: his long, thin torso (low drag in the water); arms which span 6 feet 7 inches (long, powerful, propulsive "paddles") disproportionate to his height of 6 feet 4 inches; relatively short legs (lower drag, and perhaps the speed enhancement of a hydrofoil coupled to size 14 feet (providing the effect of flippers) by double-jointed ankles he can extend beyond the pointe of a ballet dancer, enabling him to whip his feet as if they were fins, for maximum thrust through [if not over] the water.)
**********
See, I told you he was a merman!
~~~~~~~~~~~~~~~~~~~~~~~~~
PS - Check out the other photographs in the Disney Dream Portrait Series here (wonderful casting for the most part): http://missgeeky.com/2008/01/29/annie-leibovitzs-disney-dream-portrait-series/
~~~~~~~~~~~~~~~~~~~~~~~~~
PPS - Congratulations to Great Britain on your haul of Olympic medals this year! If any of you want to watch the best movie ever about the Olympics (best MOVIE ever, in my opinion), watch "Chariots of Fire", the story of two British Olympians (Eric Liddell of Scotland and Harold Abrahams of England) competing in Paris in 1924. This was when the Olympic games were still "the realm of the amateur" (imagine Sir John Gielgud as the snooty English professor pronouncing it ah-ma-TOOR).
Posted by Julie at 4:31 PM

I checked out the other pictures, too. They were fantastic. This was a very interesting post.

Not only is Phelps a wonderful swimmer but he is a nice person.
Both my husband and I were so impressed by him and his mom during the interviews after
his 8 gold wins…

and to watch this kid swim is just amazing…

I have to admit I thought the first picture was a painting! Annie Leibovitz does such amazing photography but this is even more so! And who better to be a merman than Phelps!

Michael has been wonderful to watch, he not only a swimmer, he is funny and does not mind letting people know that he loves his Mom.
The pictures are so good, Annie had alot of good stuff to work with.
Hugs, mary

Far OUT!! I'm running to the link right now.

I also wanted to let you know that I'm taking a short break from blogging. I have lots of creative stuff going on so for the moment it's "blogging without obligation" time.

I run acroos a vanity fair the other day and it had a little peak with Ariel and OMG! Juliane Moore was awesome, yes, I love Leibovitz work, in fact that's probably the only reason I buy vanity fair once in a while specially if one of my favorite movie stars is featured or the special editions they get every once in a while, they all featured her work.
He rocks, too.
He IS a Merman ;-)

Wow! That photo is awesome! I will check out the rest. Thanks for showing us these. I am a big fan as well. Isn't everyone !?
THanks again,
Colleen

THose are wonderful photos of Michael Phelps, he is an amazing swimmer. Thank you for noticing that GB have done well for medals this time:) Chariots of Fire is a great movie and the theme music is among my favourites of all time.

This is so cool!!!!I have really enjoyed the Olympics this year.
Michael Phelps is awesome.

That is so funny! When I read your title....I thought...."you know, she's right." I didn't know he had those photos taken by her. Cool.

At least he had more clothes on than Daniel Radcliff and Miley Cyrus did.

What a beautiful photo. Wow! I love such fantasy.

*!* makes a better merman than alien as some suggested he might be ... wonderful photos by Annie L *!*

Fabulous! great research, Julie!
I would never have recognized him in the first photo!
I'm sending links to this post to my friends and family!

Thank you for your comment on my 'Two Strong Ladies...' entry. I know you resonate with my 'Blogging Stuff Issues.' I know you do.

You've been strong enough to drop out of the making-comments-rat race. You've decided that you need a blogging break, and are going to take one. See how much farther along you are, than I am??

No, I really don't need a break, at this moment. I need to sort out all the other stuff. Do I NEED comments and can I stop constant commenting in other's blogs?

And it all does come down to being strong! Because you and I are in the minority. We say we have issues. Others tend to not so say.

But they will agree, when we state that we have them.

But.... how many bloggers can really make changes? Not that many. And so, they won't understand us, when we make them. So, more strength is needed! :-)

OK, I'll stop rattling on in your blog. See, I am just addicted to rattling on, so you can see that I can't stop blogging. :-) But wish me luck with my issues. And I wish you lots and lots of luck, with yours.

Does anyone know the name of the artist who made the blue picture with the mermaids and mermen?