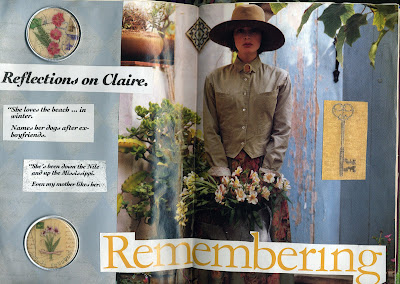 "REFLECTIONS ON CLAIRE"
**********
I have been a busy girl this summer, making pages for an altered book round robin that I'm participating in. I always do double pages.

I think you can click on the pictures to enlarge them. If not, the words below "Reflections on Claire" say: "She loves the beach....in winter"; "Names her dogs after ex-boyfriends"; "She's been down the Nile and up the Mississippi"; and "Even my mother likes her."

I've had the clipping of the woman and the quotes for ages, but only recently though of putting them together. I like this spunky woman. 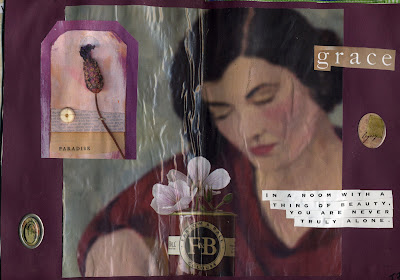 "GRACE"
**********
This one might be confusing. Her name isn't Grace, but Opal, as signified by the "O" in the lower left corner. Grace is a state of being and I feel that this lady, whom I also like very much, is the epitome of grace. The sentence says "In a room with a thing of beauty, you are never truly alone."
All those white lines on the left page aren't really there - they're just reflections. 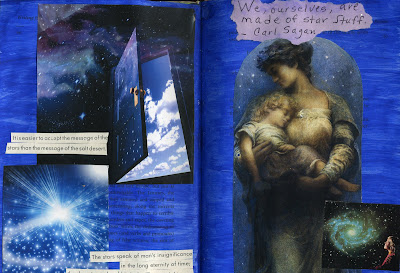 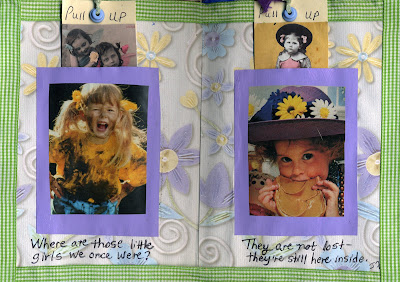 "WHERE ARE THEY NOW?"
**********
The left-hand caption asks: "Where are those little girls we once were?" The right-hand caption answers: "They are not lost, they're still here inside."
The tags can be pulled out of the pockets. Below those pictures, I wrote: "Those girls who: turned cartwheels, skipped rope, played jacks, caught fireflies, dressed cats in clothes, sang often and lustily, danced through sprinklers, played hopscotch, played with paper dolls, loved puppies, climbed trees, blew bubbles into their chocolate milk." 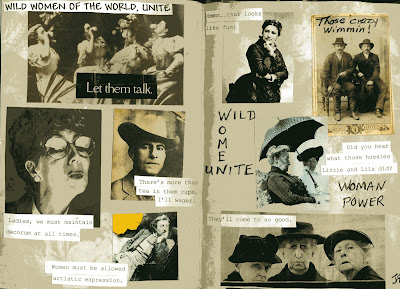 "WILD WOMEN"
**********
This collage was inspired by the picture on the top left. I suspect, as does the cowboy, that those ladies are not drinking tea. The caption says: "Let them talk." The cowboy sez, "There's more than just tea in them cups, I'll wager."
The snooty woman is saying: "Ladies, we must maintain decorum at all times."
The bohemian man (a famous writer, whose name I cannot recollect), believes "Women must be allowed artistic expression."
The lady on the top of the right-hand pages would like to join in, I think. She's saying: "Hmm, that looks like fun."
The two men are thinking: "Those crazy wimmin."
The one seated lady asks the other: "Did you hear what those hussies Lizzie and Lila did?" (Lizzie and Lila are two of the wild women in the round robin.)
The three old broads at the bottom are sure that the wild women will "come to no good." 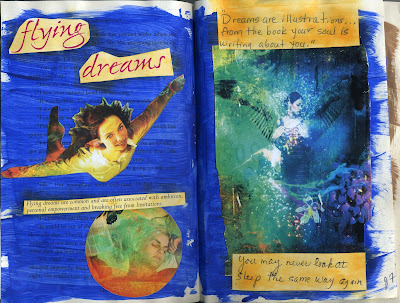 FLYING DREAMS
**********
Do you have dreams of flying? I have a lot of them! The caption on the left says: "Flying dreams are common and are often associated with ambition, personal empowerment and breaking free from limitations." Oh, really? That makes me feel better.
The caption on the upper right says: "Dreams are illustrations...from the book your soul is writing about you." Don't you love that?
The caption on the bottom right says: "You may never look at sleep the same way again." 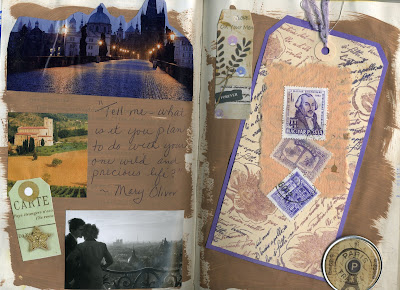 "FOREIGN TRAVELS"
**********
The poem reads: "Tell me, what is it you plan to do with your one wild and precious life?" ~ Mary Oliver.
These pages also feature a hang tag with a stamp of a 19th century woman on her Grand Tour. 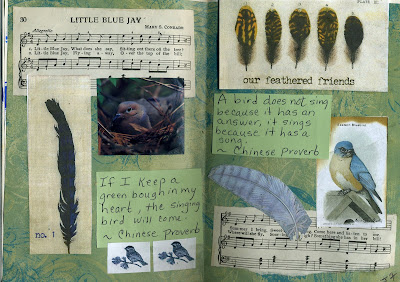 "BLUE BIRDS"
**********
Some of the items in this collage were given to me by a friend, and I am happy to pass them along to another friend via her altered book.
The Chinese Proverb on the left says: "If I keep a green bough in my heart, the singing birds will come."
Another Chinese Proverb, on the right, says: "A bird does not sing because it has an answer, it sings because it has a song" 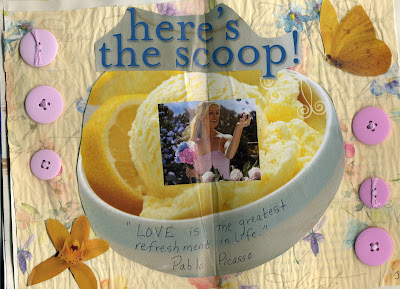 "HERE'S THE SCOOP"
**********
"Love is the greatest refreshment in life." ~ Pablo Picasso.
I used a paper napkin for the background, which gives an interesting, wrinkled effect. I also used real buttons but I didn't have to sew them. They are threaded, but they have adhesive backings so I just pressed them on.
I did lots more collages this summer, but I don't want to overwhelm you with all of them at once, so I'll show more later.
Posted by Julie at 6:51 PM

You have been a very busy girl, and so creative. Each one a adventure, so much to take in.
I hope you are having a wonderful summer. Your, mary

This was fabulous! So creative and poetic. What an artist you are!

I love your book! Do you make it and give it away? I think I would be keeping it!

I'm still unpacking from my move, but your beautiful work makes me want to hurry up and get all my art stuff out!

Have a great week, Julie! Thanks for sharing your stuff!

Wonderful Wonderful - I love every one of them and can't wait to see more - I am always thrilled when I see your name come up on my bloglines.

You inspire me and even though our lives are quite different - my art is quilts - I find motivation from what you post.

That is very cool....you did a great job and I don't know which one is my favorite....although I am sorting of leaning towards "Clare" and the "Wild Women" and..."Foreign Travels" HA! I can't decide.....I like those three topics though forsure and all the artwork you did and the poetry.
Very creative of you!!
Joyce

Wow, you have done a lot of art this summer. This looks like it was a fun
RR... Great art work…

My dream was to attend one of his lectures, he use to do a few cruise ship lectures.
It was one of those things where I would say not this year , maybe next ..

You have created more art this summer than I have all year. They are all so lovely. I really don't think I could pick just one.

Oh wow! I love them all! I guess I'll be seeing some in person soon! Love being a "hussy"!
You have been busy! thanks for sharing...dreams, travel, wildness...even ice cream. What could be better?
Don't you love seeing your artwork on the screen!!!???

You have indeed had an artful summer! I love them all and would have a tough time choosing my favorite. Please be sure to show us more.

Numero uno is my favorite, but i 'd rather not to name my dogs after goofy cakes men who left a bad memory, how about rats or mice, te-hee!
LOL
And then where are they now? is my second favorite.
Muy bien Julie!
You rock!!!
love and hugs to you from me waving my landlocked mermaid tail from sunny SD ;-)

Wow! You are simply amazing! So much imagination when into all of them. Simply amazing...

Your collages are so beautiful, Julie! I love the birds and lovely ladies!
~Kelli

wow you have been busy! You truly are a talented person.

Julie, I love them all, but especially the "Grace" quote. I'm often trying to explain that feeling to my friends. It is one of the reasons why I try to always have fresh flowers in my home. This post was so inspiring! Thank you for sharing it.

these are fantastic! I am trying to get around to blogs before my inner bear needs to go back to hibernating... I am off to the Gypsy Caravan for the weekend..so see you when I get home xo
ps - if you need some help with your 'journal' let me know.. I was thinking of having some kind of online class..

you have WOWed us !! excellent pages! I like them all.

Looks like you have been having lots of creative fun ... my favs are Star Stuff, Wild Wimmin made me laugh, and Blue Birds of course closely followed by the others. Smiles *!*

Julie,
I have seen your work. It is wonderful.Can't wait to get my book.
I tagged you over at my blog.
love you
xx

Julie each page a work of art!!
Your artistic expression...love each and every one..so thought provoking!
Good job!!The colors the quotes the illustrations!!

I have posted something I sure would love you to see! Aug.14/08 hugs aNNa

Among all these jewels of creativity, two especially shine for me - Claire's love of the beach in the winter (in my opinion, the ONLY time to go to the beach) and, the birdie page (of course). Hugs, Annie

These are gorgeous Jule ~ I especially like the top one.
I don't have much patience for collage, although I wish I did. I never like the way mine turn out!!

Julie these are wonderful, and I love the quotes.
You have had a very productive summer artistically speaking. Well done..!
Hugs
xx

Julie your pages are just fabulous! I read through each one and just can't pick a favorite, they are all gorgeous.

I need to get back to my art too - I've not had much spare time this Summer.

Hi! I´m new to Your blog and I love all the celtic images! Loved the Carl Sagan collage!

You are very talented, I'm just not very artistic :-)