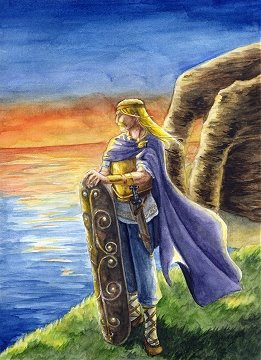 "Lugh" by Ayrtha
**********
Last year on August 1, I wrote a post about Lammas, the festival of the first wheat harvest, an Olde English holiday I wish we celebrated here. This year, I revised the post and added information about the earlier Celtic festival of Lughnasadh (loo-nahs-ah). 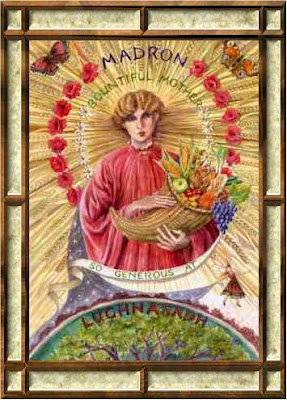 Madron, Mother Goddess
From "Enchanted Moon" website
**********
The word Lammas means Loaf Mass. On Lammas Day, it was the custom to bake a loaf of bread from the new crop of wheat and bring it to church. Parishioners sang "Bringing in the Sheaves" and decorated their church with wheat sheaves and corn dollies (made from wheat, not maize). American celebrating Lammas make corn husk dolls.

In Scotland, the first cut of the harvest was made on Lammas Day, in a ritual called the “Iolach Buana”. The entire family dressed in their finest clothing and went to the fields. The head of the family would lay his bonnet on the ground and cut the first handful of grain with a sickle. He would then twirl it around his head three times while thanking the god of the harvest "for corn and bread, food and flocks, wool and clothing, health and strength, and peace and plenty.” 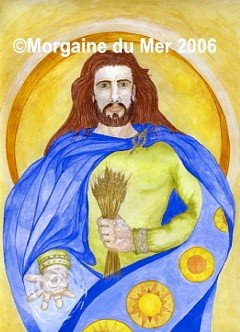 Like so many Christian holidays, Lammas was actually “stolen” from the ancient Celtic harvest holiday Lughnasadh, also spelled Lughnasad, Lughnassad and Lughnasa. It is named after Lugh, the Irish/Celtic sun god.
It is thought by some to be the funeral or wake of Lugh, the sun king, whose light is now beginning to dwindle. A more correct interpretation, however, is that it was established by Lugh to commemorate the life of his foster mother, Tailtiu, the goddess of agriculture who died while clearing the Irish forests in preparation for planting.
Lughnasadh was a traditional time for hand fasting, a temporary marriage. Couples would join hands through a hole in a stone, wall or gate, and plight their troth for a year and a day. If the hand fasting did not work out, the couple returned to next year’s gathering and officially separated by standing back to back and walking away from each other. 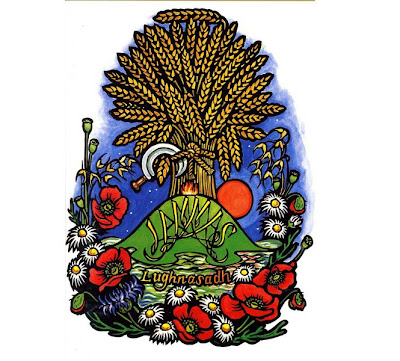 Lammas card from "Healings of Atlantis" website
**********
In early Ireland, Lughnasadh involved great tribal assemblies, with trading, feasting, music and games, and crafters displaying their wares. Right up to the middle of this century, English country people celebrated the harvest at revels, wakes, and fairs – and some still continue today. It was usually celebrated on the nearest Sunday to August 1st, so that a whole day could be set aside from work.
Rural folk sang and danced jigs and reels and held uproarious sporting contests and races. In some places, a woman—or an effigy of one—was crowned with summer flowers and seated on a throne, with garlands strewn at her feet. Dancers whirled around her, touching her garlands or pulling off a ribbon for good luck. In this way, perhaps, the ancient goddess of the harvest was still remembered with honor. 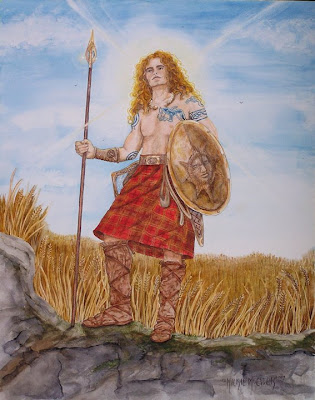 A SCOTTISH LUGH?
"Lugh" by Mickie Mueller
*********
Lammas or Lughnasadh was also known as the festival of the first fruits. It was often called "Bilberry Sunday.” Bilberries (or blaeberries), close relatives of the American blueberry, were a sign of the earth’s covenant with her children, so it was very important to gather and share them with the community.

This was the day to climb the nearest "Lughnasadh Hill" and gather the earth’s freely-given gifts of the little black berries, which might be worn as special garlands or gathered in baskets to take home to make jam, bilberry wine, “frahghan cakes” or simply mashed with cream. And some bilberries were also left behind on a special cairn or rock as an offering to an old, almost-forgotten god who first brought the harvest to Britain.

A HAND FASTING
**********
The celebration of Lammas is a pause to relax and open yourself to the change of the season so that you may be one with its energies and accomplish what is intended. Visits to fields, orchards, lakes and wells are also traditional.
It is customary to consume bread or something from the First Harvest during Lughnasadh. To celebrate the festival today, one might bake and share with friends a loaf of bread, a blackberry cobbler, bilberry (erm, blueberry) muffins or corn bread sticks (recipe below).

I plan to have blueberry muffins tomorrow morning and tomorrow afternoon I plan to see if I can find a copy of “Dancing at Lughnasa”, starring Meryl Streep, which takes place in Ireland in the summer of 1936. 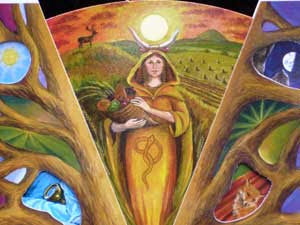 Use an iron mold shaped like little ears of corn.

Grease lightly and preheat in a 425 degree oven.

1 cup Milk (or Buttermilk if you prefer)

Sift dry ingredients together. Add milk, eggs, shortening, and beat until smooth. Pour into preheated and greased molds and bake 20-25 minutes or until golden brown.

a blessed Lammas to you xo
and no reason you cannot celebrate this in your own little way...wonderful idea those blueberry muffins ~ enjoy the movie!

Happy Lammas to you Julie ! and it's a New Moon day too! I love the pics you have displayed - beautiful!

That is a wonderful way to celebrate. Dancing At Lughnasa is a wonderful movie…
I think I will join you with blueberries on ice cream after supper and this movie as well..

Julie, This is such an informative post. You've done so much research.I appreciate that. To me this time is spiritual because it honors earth. I made oatbran muffins this am and lit candles. My celebration was quite personal since in my family it's Uncle Dan's birthday.
:-)

What a delicious(a recipe!) and informative post! I will enjoy some blueberries and am excited to hear about the movie!
I lit my yellow candle and ended up doing art all day!

Thanks for your remarks over at my lonely blog.

I love this entry, so full of facts and info. Nice pictures too. I feel inspired to cook this weekend, so I will remember the wheat and maybe my harvest this year will be bountiful.

Lammas greetings to you and yours. Save me a muffin!

As always, you've done a fantastic job of teaching us about the olde customs and beliefs. But with the hot weather I doubt I'll be doing any baking of bread but if store bought counts I'm always ready for some muffins!!

I hope you had a lovely Lammas!
I baked some homemade rolls and lit a few candles, nothing spectacular!
I never heard of that movie, but if it has Meryl Streep its probably good.
Love the Lammas pictures!

Bread is my weakness :-(
but i don't care, and your recipe sounds yummy.
I let go of my hair and it was good.
And I am letting go of other things ( I promise you) but it is not easy, that's for sure but I am doing good in other areas.
Life is good.
Happy Lammas!

WOW, I will be back to read all of your post, I am late like the Rabbit says, I just can't wait, but I will be back...it's a date.
Hugs, mary
Happy Lammas....

I'm late but... Just found "Dancing at Lughnasa" on Netflix. Thank you!

Great post and interesting as always. Thanks for the recipes too.
Hope you liked the movie.
Stop by when yu get a chance--I have something for you.
Hope your summer is good.

I was born in the wrong era not to mention wrong century. What hunky male images.

As I mentioned in the post, the painting of the wheat sheaf, etc. is from the Healings of Atlantis website, www.healingsofatlantis.com.

To copy any of these drawings, just Google Lammas or Lughnasadh (images).

This is fascinating! I am learning more about my heritage here than I ever dreamed!

I also loved all of your "tea" comments. You crack me up! I understood that you get high on coffee once a month and that you don't like iced tea. But, do you like hot tea?