WELL, WHAT DO YOU KNOW!! 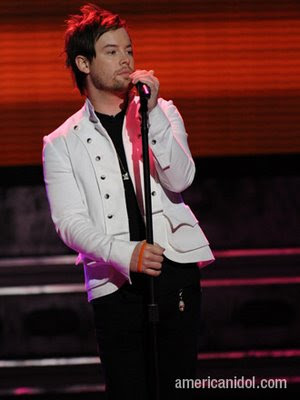 David Cook, 2008 American Idol Winner
David Cook pulled it off! Cook has been my favorite American Idol contestant for weeks (ever since Michael Johns was - shockingly - eliminated). Cook was my daughter's favorite too.

This is the first year I have watched American Idol. I started watching when the contest had been winnowed down to 24 contestants. (I'm too embarrassed for the bad singers to watch the preliminaries.)

I always thought the Top 3 would be soul rocker Cook, youngster David Archuleta or Aussie Michael Johns. When Johns was eliminated, I was stunned, along with the judges, host Ryan Seacrest, the other contestants and the live and TV viewing audiences.

Last week, I even did something I never thought I would do - voted! But last night I didn't vote because frankly I thought Archuleta had won the contest. (Thanks to Simon Cowell who all but named him the victor.) Little David does have the smoother voice, but frankly, he is bland. His personality never shines through. Last night Cook was nervous, his voice seemed strained, and the song choices weren't as good. But Cook is a genuine star. He puts his heart and soul into every song. The emotion is always right at the surface with David Cook. "Subtle and wistful" was one description of last night's performance of "The World I Know" by Collective Soul. Besides, Cook is a rocker, bless him. He won by 12 million votes, so I don't think anyone can say David Archuleta got robbed.

I wouldn't worry about little David A. He's only 17 and he has a great singing career ahead of him. I see him as fitting into the Josh Groban-type category, where he will do very well. And I predict Michael Johns will have a great run too. In my opinion he has as much charisma as that other Aussie, the late INXS lead singer Michael Hutchence.

It was a great ride. What I missed out on by not watching the first first six seasons, I think, was getting to know and love - or hate - the contestants. Who could forget sweet Brooke White, stopping and re-starting her songs? Even always-kind Paula Abdul says you can't do that. And dreadlocked Jason Castro, you're cute and cool, but what the huh happened with you? Then there was Irish-born Carly, who couldn't catch a break with Simon, and Syesha Mercado, who couldn't catch a break with any of the judges. Danny Noriega? Ick! Biker chick Amanda Overmeyer? Not my style. For sure, I'm going to watch next year. 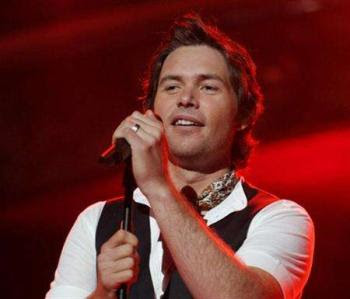 Michael Johns, not an also-ran at all.
Posted by Julie at 8:50 PM

I had hoped for the same top three as you: David C. David A. and Michael Johns. I'm very happy with tonight's results! Yay!
~Kelli

I was so disappointed as I really thought David A. had the better voice (yes - I agree, he may give Josh Groban a run for the money as he matures) and, after the wonderful job he did on all three songs in the finale, I thought for sure every teenybopper in the world would vote for him!

We didn't vote until the finale. We have watched several years but this will be the last time - it's become a bore and I think much of it is 'fixed'. Carly and Michael should never have been eliminated so soon, and that dreadlocked Jason was just appalling in every way and should have gone much earlier!

Glad I can get dh away from the TV screen now - he was hooked more than me. Now if only the next horrific TV extravaganza - the election - could be banned, life would definitely be much more pleasant!!

Although from Utah (little David's school is right up the street) I think the right David won. I think he put more creativity into his performances. And I think at 17, David A has so much more time to mature and hone his gift.
Way to go David Cook! We are all so happy for you!
Colleen

Yeah for our David Cook.. He rocks and his voice speaks to me. I love his LOOK and he's sweet. Michael Johns was another fave ..I too was SHOCKED when he was eliminated so soon..and Carly OH she was GREAT and she came along so nicely.
Then Syesha..Oh Broadway for her!!!
Alas..I watched the top 12 on and got hooked SO FAST. I had not watched it since season 2.

I voted last night as I was sure EVERY vote was needed for David Cook...David A is great too and he'll not be left behind!!

American Idol is WORTH watching!! now off to download some Cook on Itunes..
HAVE a GREAT day!!

First of all, thank you so much for the comment you left on my post about that hateful email I had received...I feel bad I got you all involved but I was so shell shocked when I received it!! Especially coming from who sent it!!!! Anyway, I appreciate your love and concern and it's people like YOU who make blogging so worthwhile:-)

I've never watched American Idol I'm afraid but it sounds like I've been missing a lot of fun throughout the years! lol Glad to hear your favourite won:-) xoxo

Hey Julie I voted for David Cook too!
I always have been a fan of American Idol..and dancing w/ the stars!!
How are you doing Julie! It's been cold here..45 degrees...too cold for this spoiled sunkissed NG

Just stopping in to say HELLO
and thanks for being a friend..
and an uplifter..Deena

Even Amazon is out of stock now.

I have my local book store getting it for me. {and there will be no shipping cost, this way} It's not even in the Border's warehouse, and she has to get it from a supplier, being as it's a UK book. Which you know.

2 to 3 weeks wait! -moan- -sigh- -groan- And I was all ready to read begin it, over this holiday weekend. -sighhhhh-

There! Don't I feel perfectly pitiful?!? You bet I do. -giggles-

My children used to try to get me to watch American Idol but I just never seemed to have the time. Then three years ago I started watching and I have been hooked ever since. I love David Cook and I was hoping he would win. When he sang Billie Jean that was it for me.