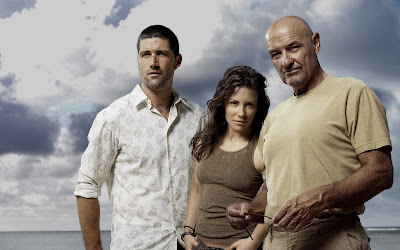 No husband, no dogs, no phone calls, no computer allowed. I will be giving myself up totally to the "Lost" experience tonight.

The first hour is a repeat of a previous episode, which I am hoping is the episode I missed a couple of weeks ago due to book club. I debated, I really did. Since our hostess for May lives only a half a block from me, I thought of going to book club for an hour, walking home and watching “Lost” and then returning afterward for the rest of book club. But I was a grownup and did not do so.

After the repeat tonight comes the much-anticipated two-hour finale. Promos have promised to reveal "one of the island's biggest secrets".

I can’t believe how wrapped up I am in this show and its characters. Regarding the Jack-Kate-Sawyer love triangle, I root for Kate to eventually end up with Jack, but I do see the good in Sawyer. And I have always had a soft spot for bad boys. 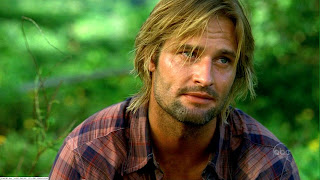 WHO CAN RESIST THIS BAD BOY?
**********
I still can’t believe Charlie is dead. Or, for that matter, Boone – and he was killed off in what, the first season? The island heals people, so why didn’t it heal gravely-wounded Boone? So many questions, so many mysteries. I can’t say that I have followed the twisting, turning plot all that well over the years. Who has? And this year, with flash forwards as well as flashbacks, it has been even more confusing. It helped a lot this season to have a captioned repeat episode that aired before each week’s new episode.
There are many theories as to what the island really is, but I don’t much care. All a dream? A fourth dimension? All in Hurley’s mind? A mass hallucination? It doesn’t matter. To me, “Lost” is a character-driven series. So my concerns are: Will Hurley finally escape the curse of winning the lottery? Will Desmond be reunited with Penny? Will Sayid find a woman to love who doesn’t die on him? Whose side is Juliet really on? Is Benjamin a good man or a bad man? Will the Oceanic 6 return to the island?

Here’s a piece of trivia for you: Sam Anderson, who plays Bernard, attended my alma mater, the University of North Dakota. Although - aside from “Lost” - he usually plays less-than-savory characters, I’ve loved him ever since I saw him perform the lead in “Luv” when I was a freshman and he was a senior.
I’m not thrilled that “Lost” is aired only in the spring. I think it cost the network a lot of viewers. But not me – I’m in it for the long haul. Because I must find out what happens to my friends in the end. Not just in tonight's season finale, but in the (sadly) few remaining seasons. 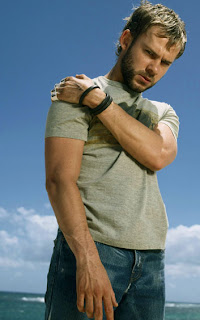 GONE BUT NOT FORGOTTEN

CHARLIE (ABOVE) AND BOONE (BELOW) 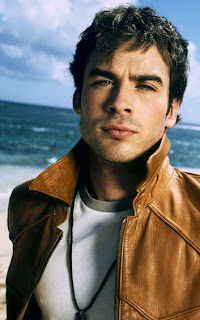 Julie- I love 'lost' too, but we havent managed to see any of season 4 as we dont have 'sky' here now sadly. I have seasons 1-3 on dvd, and cant wait for the release of season 4 so i can catch up!! Knowing its on the TV and not being able to receive it is awful!

Ah, Julie....you're a woman after my own heart! I have watched "Lost" faithfully from the very first night it aired and have been hooked on it ever since. I managed to get my daughter addicted, too! We watch every episode and then call each other on the phone and re-hash everything that happened. Last night's finale was so good, with so many ups and downs, twists and turns that I felt like I was on a whirl-a-gig! I was crushed that Jin apparently died as he is one of my favorite bad boys. :-(

Hi Julie! I am a total fan. Yes, the 1st episode shown last night was from two weeks ago. What a finale. Holy cow and far OUT. Can't wait for fall. They will probably make us wait forever and not show anything til October. Grrrrr.

After reading this post, you're making me wish I had kept on watching "Lost"! lol I only watched the first season of it and then lost interest mid way through the second season...not sure why, since I was so enjoying it before!! Sounds there's quite a lot going on and just as many mysteries. Omigosh, I didn't know they had gotten rid of Charlie on the show, I figured he'd be one of the main characters to stay.

When you have a chance, make sure you drop by my blog to enter my giveaway:-) xoxo

So...didja see it?? Wow...I am SOOO ready for the NEXT season!
Colleen

I see people who are happy with waiting and renting a series like this. Being able to watch it from the beginning, without commercials and when they can. And this sounds good to me. So many people love 'Lost' that it certainly comes with built-in recommendations.

Maybe... Maybe when I again get Net Flix. When I have a nice list of things I really want to rent... I'll try out 'Lost.' It would be fun to have something to "be into." It would. Thanks for the push, that way.

I've come rather late to 'Lost' but am hooked now. My eldest son lent us the DVDs for Series 1 & 2 when my DH came out of hospital so we started watching without any real enthusiasm but soon got caught up in it all. Now he's lent us Series 3 and we are watching that - 2 episodes each night. We haven't been watching Series 4 on TV because we need to know what happens in 3 first. We'll be buying the Series 4 DVD the minute it comes out though. Locke is my favourite character so I'm hoping he makes it through to the end in one piece!

Lost in Lost is right... I must admit though that it really has me lost right now. I'm ready to book a charter cruise to the island. There is so much flipping back and forth between past, present, and future that your guess is as good as mine right now. However, I am smitten. I hope to watch all of the episodes again this summer to see if I missed anything important. And, you are right about Sawyer. There is a bruised heart buried in that man. (And, in real life, he is so charming when interviewed!)

I love this show!
unfortunately this season I missed the whole thing :-(