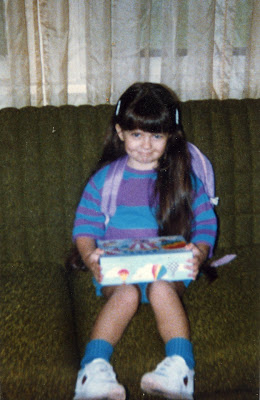 FIRST DAY OF SCHOOL, SEPTEMBER 1987
Today has been a happy, happy day for our family!

Almost 21 years ago, our daughter, Kristen, entered the doors of Will-Moore Elementary School in Bismarck for the first day of kindergarten. Over the years she moved on to Hughes Junior High School and Bismarck High School, and then went on to college at Georgetown University in Washington, DC. She earned a B.A. degree from Georgetown in December 2005.

And today, she received her Master of Science degree in library science from Catholic University of America. Sadly, we were not able to be there, but we were there in spirit.

Effective June 1, she has been appointed director of acquisitions, serials and fast-track processing at the CUA library. (She was acting director of serials; this promotion brings a hefty raise!)

Kristen was a much-lauded student of languages in high school, taking first place in the state French and German exams, and earning the national gold metal in Latin. She studied German and French at Georgetown, eventually settling on French for her major.

But along the way, she changed her mind about her future vocation. We might have suspected that Kristen, a gifted reader, would someday turn to library science. I used to bring her to the Tribune after school some days, and my fellow reporters would marvel at this petite child, almost dwarfed by the newsroom desk she sat at, totally absorbed in reading books like "Gone With the Wind" and "The Stand."

Because she was interested in languages, I encouraged Kristen to go to Concordia College in Moorhead, Minnesota, just a three-hour drive away with a superb languages program. "I'm not going to a religious school (Lutheran)", she declared. (The truth: "I'm not going to college so close to home.")

It's a standing joke in our family that Kristen ended up attending two religious universities. Georgetown is a Jesuit institution, and CUA is obviously Catholic. And we are not Catholic!

For Kristen, a trip to the East coast at a tender age clinched her college decision for her. She fell in love with Georgetown and with the College of William and Mary in Williamsburg, VA and would only consider and apply to those two.

Over the years, Kristen walked miles of hallowed hallways and entered many an ivy-clad building. She had some bumps along the way - problems with physical and emotional health - but she overcame her obstacles and bounced back better than before.

I salute her strong work ethic (yeah, she's a North Dakotan), her intelligence, her strength, her humor, her tender heart and her wisdom which is far beyond her years and far beyond mine.

To celebrate her graduation, she and her boyfriend are taking a trip to California. Well deserved, Kristen! We love you so much and we are SO proud of you. Love from Dad and me and the puppies, and Glori, Kelsey and Mike. 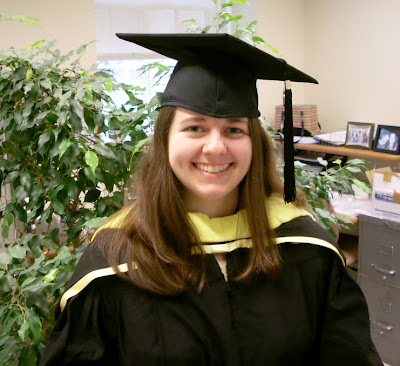 MAY 2008 GRADUATE OF CATHOLIC UNIVERSITY OF AMERICA
Posted by Julie at 5:55 PM

Congratulations on your daughter's graduation! She is one smart cookie; isn't it fabulous to be able to proudly say she is your daughter? It makes all the hard times and rough patches so worth it - to see your child accomplish great things! Many happy travels to her and she will never, EVER regret going for higher education at a young(er) age!!

Oh, Julie! Congratulations! She is lovely!

Your daughter is lovely and smart, congratulations, I do believe it takes a villiage to bring up these wonderful young hearts.
Hugs, Mary

JULIE!! many many congratulations to Kristen on her graduation, and many more to you and your husband too, you must both be so very proud of her!

blessings to ou all,
Leanne x

Such a beautiful young lady! She seems to be as beautiful on the inside as she is on the outside! Congratulations!

Congratulations! Well done, Kristen....and you, too, Mom! How proud you must be of such an accomplished daughter. And she's beautiful plus smart. That's a winning combination for sure.

I hope Kristen likes hot weather because here in CA that's what we're having right now! Today it's supposed to be over 100º!

That is fantastic! I am very happy for and proud of your daughter along with you all! She looks lovely.
I just hope I can get my "people" out of High School and into college. HA~!!! We are nearly there with #3 graduating tomorrow night.....now if we can get Miss Priss to hunker down with her studies better....I can relax...but it doesn't seem to be happening yet HA!
Your daughter is very gifted!!!
I love that she is a major reader..and now into the Library Sciences....fab.
Congrats on your wonderful daughters achievements.
Joyce

a great BIG congrats..on the graduation and the new job!!
awesome
Deena

Congratulations on your daughter's achievements because it's also yours and her fathers. You must be so proud of her! Nice post.

Congrats!
I know you are so proud of her!!

I'll wave symbolically when she comes to California. What a gifted young lady! I secretly envy people who are gifted with languages. And, to be a voracious reader, too!

I applaud her achievements and perseverance—even past all of the hurdles that try to convince us to quit jumping. It paid off! Now we get to see how all of this preparations unfolds! What a story that will be!

Marvelous!!!!
Congratulations to all of you!
(I love libraries too!)

Congratulations! How exciting to be starting a brand new life! I think that's wonderful!

i am teary...
i see my daughter in yours...
succesful, intelligent, lovable, EVERYTHING!!!
Julie what a blessing!!!

She's not only smart but a lovely young woman as well. You have every right to be totally proud of her and her accomplishments. Good for her and good for you being her Mom and a force in her life!
Colleen

Well done and Congratulations to Kristen!!!!
Julie, you and your husband must be so proud!!
love from Kathy and the girls

Congratulations to you all!
hope all is well with you xox
I am coming back to earth after my time away - jet lag took its toll :)

Congratulations to your daughter, this is fabulous!!
Sending hugs))

What a beautiful daughter you have, Julie! Congratulations to her!
~Kelli

I welcome her to the international librarians' sisterhood !! We are lovely people and I hope she has as much joy in her chosen job as I have done.

As I contemplate leaving the profession its good to see a new one coming in!

Hi Julie - this is wonderful news about your Kristen - you must be so proud!! Congratulations to her - the future looks rosy and bright...............and all those fabulous books!!!

Send my congratulations to Kristen, what an accomplishment. I can see you are one proud momma!

What a wonderful event! My sister in law is a law librarian, so I'm very familiar with what an accomplishment this is. Best wishes to the graduate and my congratulations to all of you!

I visited Catholic University and Georgetown when I stayed in one of the dorms at CUA while traveling in D.C. during the 80's. The Cathedral is quite lovely.

You must be so very proud of Kristen, what a talented young woman she is. I hope she and her boyfriend enjoy their trip to California

Happy Day*!* Congrats to your daughter and her proud parents *!*