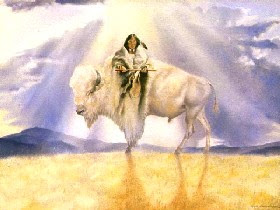 LEGEND OF THE WHITE BUFFALO CALF WOMAN
The White Buffalo are sacred to many Native Americans. The Lakota (Sioux) Nation has passed down the The Legend of the White Buffalo --a story now approximately 2,000 years old--at many council meetings, sacred ceremonies, and through the tribe's storytellers. There are several variations, but all are meaningful, and tell of the same outcome. Have communication with the Creator through prayer with clear intent for Peace, Harmony and Balance for all life living in the Earth Mother.

Spirituality among Natives Americans and non-Native Americans has been a strong force for those who believe in the power of the Great Spirit or God.

It matters not what you call the Creator. What matters is that you pray to give thanks for your blessings and trust the guidance given to you from the world of Spirit. Many truths about Spirit are told and handed down from one generation to the next.

The legend of the White Calf Woman tells how the People had lost the ability to communicate with the Creator. The Creator sent the sacred White Calf Woman to teach the People how to pray with the Pipe. With that Pipe, seven sacred ceremonies were given for the people to abide in order to ensure a future with harmony, peace, and balance.

Legend says that long ago, two young men were out hunting when from out of nowhere came a beautiful maiden dressed in white buckskin. One of the hunters looked upon her and recognizing her as a wakan, or sacred being, lowered his eyes. The second hunter approached her with lust in his eyes desiring her for his woman. White Buffalo Calf Woman beckoned the lustful warrior to her, and as he approached a cloud of dust arose around them causing them to be hidden from view. When the dust settled, nothing but a pile of bones lay next to her. As she walked toward the respectful young hunter, she explained to him that she had merely fulfilled the other man's desire, allowing him, within that brief moment, to live a lifetime, die and decay.

White Buffalo Calf Woman instructed the young man to go back to the People and tell them to prepare for her arrival to teach them of the way to pray. The young hunter obeyed. When White Buffalo Calf woman arrived with the sacred bundle (the prayer pipe) she taught the People of the seven sacred ways to pray. These prayers are through ceremonies that include the Sweat Lodge for purification; the Naming Ceremony for child naming; the Healing Ceremony to restore health to the body, mind and spirit; the adoption ceremony for making of relatives; the marriage ceremony for uniting male and female; the Vision Quest for communing with the Creator for direction and answers to one's life; and the Sundance Ceremony to pray for the well-being of all the People.

When the teaching of the sacred ways was complete, White Buffalo Calf Woman told the people she would again return for the sacred bundle that she left with them. Before leaving, she told them that within her were the four ages, and that she would look back upon the People in each age, returning at the end of the fourth age, to restore harmony and spirituality to a troubled land. She walked a short distance, she looked back towards the people and sat down. When she arose they were amazed to see she had become a black buffalo. Walking a little further, the buffalo laid down, this time arising as a yellow buffalo. The third time the buffalo walked a little further and this time arose as a red buffalo. Walking a little further it rolled on the ground and rose one last time as a white buffalo calf signaling the fulfillment of the White Buffalo Calf prophecy.

The changing of the four colors of the White Buffalo Calf Woman represents the four colors of man--white, yellow, red and black. These colors also represent the four directions, north, east, south and west. The sacred bundle that was left to the Lakota people is still with the People in a sacred place on the Cheyenne River Indian reservation in South Dakota. It is kept by a man known as the Keeper of the White Buffalo Calf Pipe, Arvol Looking Horse.

The legend of the White Buffalo Calf Woman remains ever promising in this age of spiritual enlightenment and conscious awareness. In today's world of confusion and war many of us are looking for signs of peace.

"With the return of the White Buffalo it is a sign that prayers are being heard, that the sacred pipe is being honored, and that the promises of prophecy are being fulfilled. White Buffalo signals a time of abundance and plenty." (from Sams and Carson, Medicine cards)

Though harsh as the world we live in may be throughout recorded history there have been spiritual leaders teaching peace, hope and balance (synergy) amongst all life. This was taught by great teachers such as Jesus, Buddha, the Dali Lama's, and Native American leaders. Chief Crazy Horse, Chief Seattle, and Chief Red Cloud are a few of the visionary leaders who committed their lives to bring peace, and internal happiness to all who they touched. They were tangible signs of goodwill toward all men, women and children.

I so enjoyed reading this...I love learning the many legends behind the Native beliefs. We have an island two hours from here called Manitoulin Island and I love visiting there because it's the home of natives and everything you see on the island has a legend behind it. We need to embrace their spirituality. xox

White Buffalo Calf Woman is one that I call in when I do a protection around my healing room. She stands in one corner protecting all who are there and keeping negativity out. I must post it on the Croning blog oneday..

i just want to let ppl know that even though i am in australia this beautuful peacefulwhite buffalo calf woman came to me and my healer during a reiki treatment, stunning and so powerful i feel blessed to have had her there :)