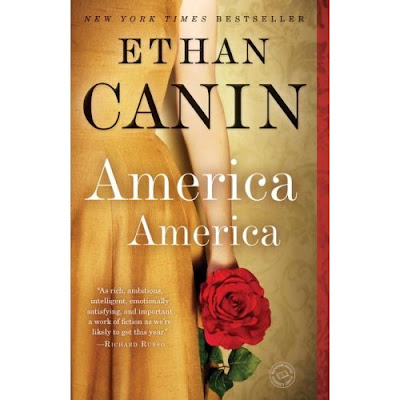 After my rant about my book club in the previous post, reader Odette suggested that I share the books I've read with readers of this blog. I think that's a great idea. I'm going to delete my book blog, which I had not updated for a long time anyway.
I think my book blog failed because I felt compelled to give long, in-depth book reviews. I kept putting off posting and then my memories about the books were not as sharp. It will be easier to give short "reviews" - actually just observations - about the books right after I've read them.
I'll start with the three books I read most recently.
Was it an eerie precognition that caused my book club to read "America, America" by Ethan Canin this month? It tells the story of charismatic Senator Henry Bonwiller from New York, who is making a bid for the presidency, and the members of the rich Metarey family, who are his staunchest supporters. In the course of events, the senator kills a young woman in a car accident and, with the help of Liam Metarey, covers it up (a definite reference to the Teddy Kennedy/Chappaquiddick affair).
The story is told from the point of view of Corey Sifter, the young man who is employed by the Metarey family, and who unwittingly (at the time), is involved in the cover up. This story of a politician with an admirable record and a social conscience - who at the same time has a less than stellar moral personal life - and the repercussions for everyone of hiding such a deadly secret, certainly made for intense discussion.
Today, the country is mourning "the Lion of the Senate" but there are people like me around who still remember Chappaquiddick, the incident that forever sealed Ted Kennedy's fate regarding his becoming president. (Not to mention the Michael Smith rape trial.)
Just like with the death of Michael Jackson, in the depths of mourning we are forgetting the bad and eulogizing only the good. 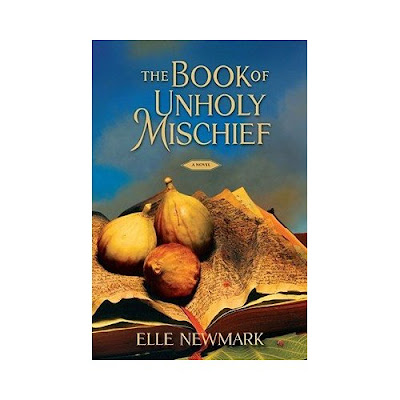 "The Book of Unholy Secrets", by Elle Newmark, is as sensuous as a fig. Set in the Venice of 500 years ago, it tells the story of a street urchin who becomes a cook's helper in the palace of the Doge, the chief magistrate and leader of Venice.
The book is full of intrigue about another book - a book of secrets - which everyone from the Pope and the Doge on down wants to get their hands on, for it may contain the secret of eternal life. Or does it contain love potions, or the formula for alchemy? Or maybe it's the gnostic gospels.
Everyone has a different idea, but each is willing to pay a lot of money, steal or kill to get their hands on the book.
Venice, that beautiful, opulent, ugly, decadent city, is a character in the book as well, as is food. When I read it, I knew the author must be a foodie for the loving descriptions she gives of the recipes concocted in the Doge's kitchen. They are enough to make a reader salivate. I found out I was right, for Newmark is the daughter of a chef. 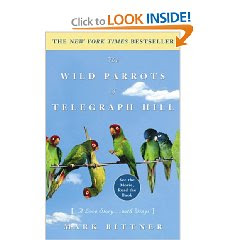 I had known about the Wild Parrots of Telegraph Hill for a long time. I first read about them in Armistad Maupin's "Tales of the City". That book, plus a non-fiction book on the cottages of San Francisco (many of which are located just off the hundreds of steep steps that go up Telegraph and other hills), made me fall in love with San Francisco before I ever went there.
Now, I am in love with The City By The Bay all over again, and I'm in love with parrots, namely, red-headed conures (and a few blue-headed conures).
"Wild Parrots", by Mark Bittner, tells the story of how Bittner came to love these birds. The theories of their origins in the city are not proven, but they were probably "caught in the wild" parrots who escaped their keepers.
Bittner was a self-described "dharma bum", a semi-homeless person who did only odd jobs. Instead, he depended on "Spirit" to lead him on his path and show him what to do with his life. At first he lived on the street, then was able to stay rent free as a caretaker at a cottage on Telegraph Hill. There, he first began to observe the birds, then feed them and study them, and finally make friends with a select few. His tender feelings for those birds, especially Conor, Dogen and Tupelo, shines through. I read the book yesterday, and today I'm still thinking of those precious little beings.
Although Bittner's personal philosophy irritated me somewhat (especially the remark that he needed to find a woman to support him), he is a wonderful writer who really brings the city, the birds and his own situation to life. I only wish he had realized earlier what a good writer he is.
He questions whether he is guilty of anthropomorphism, but in the end insists that each bird does have a distinct personality. He proposes a wonderful thesis on the subject of human vs. animal consciousness. His conclusion: that humans, birds, and all creatures are all part of a universal consciousness.
His book, "The Wild Parrots of Telegraph Hill" was the basis of a documentary by the same name. It was made by Judy Irving, who later became Bittner's wife. He lives a more stable life now, and is no longer actively involved with the parrots. However, he says, "I still watch over them, make sure no one exploits them, and I always will." Through the book and the film, the citizens of San Francisco became advocates for the birds' protection, and the flock is now thriving. From just four birds when Bittner first sighted them, to 26 when he began feeding them and the 57 he could later call by name, the conures now number over 200.
In the end, Spirit did give Bittner everything he had yearned for: a job, a woman who loves him and a close friendship with a wild animal. I doubt that Spirit is that generous to everyone.
Posted by Julie at 11:11 AM

Wow, three books of different genre! And thank you for the beautiful synopsis, i was tempted to head out to the book store to search for them. I love books that left a warm feeling in my stomach after i have read it, or makes me ponder about things and life in general.
I too wouldn't want to put down a book until i am through with it, because i hate going to bed w/o knowing how the story will end! I brag about my 20/20 vision when my grandma would scold me about my late night readings. I guess she's right, coz i now need a reading glass - or am I just getting old? haha!

Well, you know me..anything about animals is going on my list :-)

We lived in Corte Madera (across the bay on the Marin county side) for 3 years and I LOVED the City! We both worked in the city and took the ferry to work! But walking the streets of San Francisco was the best( wait, that didn't come out right..) the smells, the diversity, the beauty! I loved every minute there- we just couldn't afford even a meager lifestyle - it was above our means - but I will always have a place in my heart for San Francisco!

I very much appreciate your kind words about my book. I would like to make a few corrections, however. I don't understand where you got the idea that I believed I needed a woman to support me. That's never been an idea of mine. My wife's name is Judy Irving, not Joyce, and the book came before the film. Also, I don't feel my years before the parrots were at all wasted. I'm working on a new book about that period now, and it's become an immense project!

But as for that other comment? I was sure I had read something to that effect. I will have to go back and peruse the book again.

Good luck with your next book. I look forward to reading it. You're a good writer.

I must look out for the second of your books, it sounds the kind of book that appeals to me. It's a good idea to review the books you read on here and anyone who has also read them can comment and it will be nearly as good as a book club - or better in the case of the one you've just left:)

I think this is very special. I am not the reader that you are, but like a movie, you like to know about good books.
I wanted to share a movie that I have watched and think it is worth a peek. the name of the Movie is...
Doubt. It is a story about how Doubt can hurt someone, or you can be hurt by it. Something to think about when you are looking for a really special story. Your, Mary

Julie, I think there also Wild Parrots in Chicago. I don't have a link for that, but there is probably one on the Brooklyn Parrots site.

I'm so glad you are blending your book reviews here. I always forgot to go to the other blog.

I first met Bittner on the documentary. One of these days, I'll read the book.

The Kennedy in deguise book, I'll probably pass on. Too much politics in real life and I too remember Chappaquidic. Lots of selective memory going on today but that's alright. He DID achieve much good and it should all be remembered. It will be interesting who writes the definitive TK bio.

Intrigue in Venice is looking good. I'll put that one on my list to read.

You are a prolific reader. I have read many of your recommendations.
Especially the ones you've rated highly. I'm reading one right now: Before Women had Wings.
xx

Julie, Thank you for the compliment on Teddy Kennedy, It means so much coming from you.
Today is what I am calling...get it done day. I can't seem to stay with anything very long.
Thank you, Mary