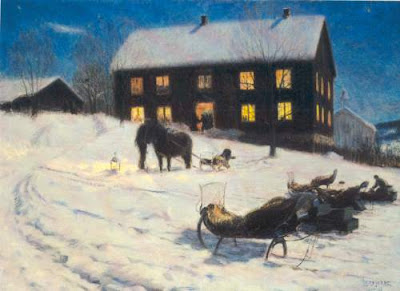 "YULEGILDE" BY LARS JORDE
I had already been planning a post on Scandinavian Christmas customs this year, since I am one-half Norwegian (minus a small fraction represented by a Swedish great-great-something- grandmother). Also, my husband is part Danish. In searching the Internet for illustrations for this post, I found the Christmas painting, above, by Norwegian artist Lars Jorde. 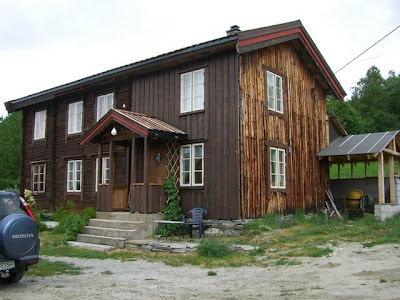 MY GRANDMA'S, SORE PLASSEN, NORWAY
Imagine, then, my surprise when my Cousin Kevin recently sent me photos of his summer trip to Norway. Can you see the resemblance between the house our Grandma Julia grew up in and the house in the painting? This coincidence, plus photos of the interior of Grandma's house, made me eager to re-explore how my great-grandparents, Ole and Margrete Wangen, and their children - Olaf, Jennie, Julia and Marie - might have celebrated Christmas. 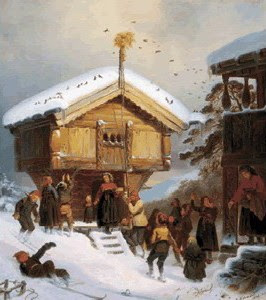 "NORWEGIAN COUNTRY YULETIDE"
BY ADOLPH TIDEMAND
The painting above shows a Norwegian stabbur, or storehouse. Sore Plassen only had a barn and not a stabbur, as far as I can tell, but many, many Norwegian farms did and do have them. On the pole atop of the stabbur you can see a julenek (definition below). 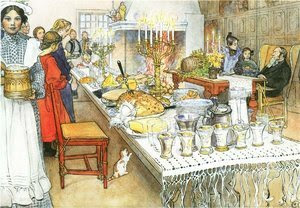 In ancient times, Christmas in Norway was a mid-winter feast - a festival of lights marking the transition from the dark winter to spring and summer. In the 900s King Haakon I decided that the heathen custom of drinking Jul (Yule) was to be moved to December 25th, in honour of the birth of Jesus Christ. Gradually, the pagan feast was Christianized, but the name Jul was retained. Norwegian Christmas is thus a mixture of ancient heathen and Christian traditions.

Our Norwegian ancestors took Advent seriously. They also used that time to do all the Christmas baking, and the brewing of the special Christmas beer, juleol.
On Christmas Eve Day, the tree was decorated by the parents behind the closed doors of the living room, while the children were bursting with excitement outside.
It was also usual on Christmas Eve Day to make a trip to the barn with a bowl of porridge for the "nisse", the gnome who -- according to superstition -- was the protector of the farm. Nowadays this ceremony is performed for the benefit of the children, but grandmother might possibly have an uneasy feeling that the little fellow could actually exist. (More about nisse below.)
But the nisse is not the only one to be given a treat; the julenek, a sheaf of oats for the birds, is mounted on a pole, and the farm animals get a special Christmas feed.
In days of old, Christmas Eve began with the ringing of the bells at 5:00 PM. The Christmas story was read from the Bible, then the evening meal was served.
The main dish on Christmas Eve was usually lutefisk - codfish preserved in lye and boiled. Other items on the menu might be potatoes, rutabagas, cabbage, risengrot (rice pudding) or rommegrot (sour cream pudding), gingerbread or julekakke, a sweet Christmas bread filled with raisins, candied peel and cardamom.
"But the children do not usually enjoy the meal very much. Their eyes keep turning to the closed living room door, and they grow more and more impatient with the unbearably slow pace with which their elders finish the meal. It seems to them as if an eternity has passed when the big moment arrives and the door to the living room is thrown open.
The children tumble in, only to stop short, awestruck by the sight of the tree, aglow with the light from real candles, and with the neatly wrapped gifts heaped underneath." (Vera Henriksen, Norway Info)
Then followed a Norwegian ritual known as "circling the Christmas tree". Everybody joined hands to form a ring around the tree, and the family and guests walked around it singing carols.
Finally, the gifts were distributed. Later, they might have one of the traditional seven kinds of Christmas cookies and a cup of glogg, a spicy drink with raisins and chopped almonds. Here is the link my post from last December about Norwegian cookies and pastries: http://celticanamcara.blogspot.com/2007/12/scandinavian-treats.html
On Christmas Day, the family went to church. In the afternoon the children went from door to door asking for treats and goodies. This practice was called Julebukking. The traditional Christmas Day meal usually featured pork as the main dish.

"NOW IT'S CHRISTMAS AGAIN" BY CARL LARSSON
It wouldn't be a traditional Scandinavian Christmas without the Norwegian Julenisse or the Swedish Jultomte. Legend has it that nisse and tomte were mischievous domestic sprites who resided in the pantry or barn. They were responsible for the protection and welfare of the farmstead and its animals, especially the horses. The original nisse and tomte were about the size of a young child. They had an enormous capacity for work but would not tolerate anyone's interference. It was believed that a clean and orderly home or farm was an indication that these elfin presences resided there. 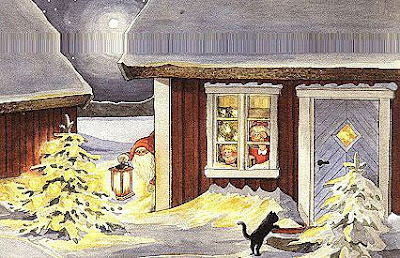 A NISSE WAITING FOR HIS PORRIDGE
(Will the kitty get it instead?)
The present-day version of the Julenisse or Jultomte is very different from the legendary gnome. In modern-day Scandinavia he is more like St. Nicholas or Santa Claus. He is is portrayed as an older, good natured, adult-sized man with a long white beard and a red hat and suit. He carries a sack of toys on his back, visits children in their homes on Christmas Eve and always asks, “Are there any good children here?” ("Er det noen snille barn her?") 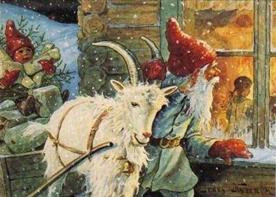 Norwegian nisse can also take the form of a Christmas buck, or or Julebukk, which dates back to the Vikings and pagan traditions of worshipping Thor and his goat. In Sweden the Jultomte is accompanied by a Julbok, a Christmas goat who pulls his sleigh as he delivers gifts to the children’s homes.
Scandinavian children today still leave a bowl of porridge (julegrøt) with plenty of butter (nisse are greedy for butter) out in the barn or in the house for the Julenisse or Jultomte on Christmas Eve. It is said that if the nisse is pleased with his gift, he will treat the family well. If not, he will play tricks on them! 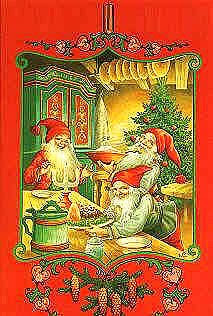 Next week I'll do a post on traditional Scandinavian Christmas tree decorations and other holiday decor. 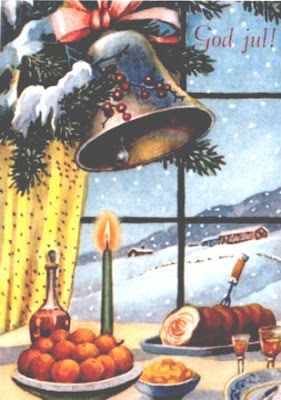 A VINTAGE NORWEGIAN CHRISTMAS CARD
(There's Grandma's house again!)
**********
NOTE ADDED WEDNESDAY NIGHT: My grandmother, who was 17 at the time, and her two sisters and brother emigrated from Norway in 1912 after both their parents died. Sore Plassen, once terribly neglected, has been restored and is now a weekend home. The new owner graciously let my cousin visit the house and take photographs.
Posted by Julie at 1:35 PM

What a beautiful and thoughtful post. As always I love Carl Larrsen's paintings. All of the other illustrations and paintings are wonderful as well Julie. It's interesting how different cultures celebrate in unique ways.

WOW!! I loved this.......I am going to have to re-read it. HA! Because I read it fast and I want to take it in better.
Aren't the various cultures awesome. I just love them.

That is an amazing likeness in the photo to the painting! It MUST be the same house! I too want to go back and re-read you great post - when I have time to savor it with a cuppa tea - Christmas Tea?? YES!
Have a safe day my friend :-)
Colleen

Thank you so much for your comments on my blog, was a lovely suprise this morning, I just adore your paintings you have posted, been admiring them all through your blog, going to add your blog to mine take care fiona

I'm taking a break from blogging over the holidays but wanted to wish you and yours a Merry Christmas and all the best in 2009!

See you next year!

Hi Julie, I loved this post... Beautiful illustrations and new things to learn. Thanks for visiting me. I am so excited about seeing "A Christmas Carol" next week!

How wonderful to find a real structure which has a connection to your family! I think her house if very interesting!

The post about Norweigian Yuletide was so well done! I'm always impressed with your writing and the illustrations you choose!

What wonderful images for the holidays. What a delightful photo surprise. A great cultural history post. Hugs, Annie

Dear Julie,
What a wonderful post. I remember seeing some of Carl Larrsen's work in the old "Victoria" Magaines.

I hope you and yours have a wonderful Christmas!

Simply lovely - thanks so much for sharing.

What interesting and fun information.
I love you Christmas banner, it so pretty…

Hello! I really liked the way you discrabed it. I am from Sweden and I know Carl Larssons grand daughter and I'm sure that she would be proud to se that you know of him all over the atlantic sea. Have a great holidy!

What a story. What a neat tradition. I had no knowledge of these things!!!
Happy Christmas Julie xoxo
(Love your Grandmothers old house!)

Great.... I´m from latin america and i found lovely and really interesting this customs.... thanks