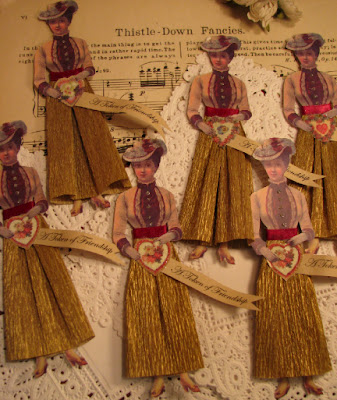 (Photo from Mrs. Staggs' Blog)
"Thistle-Down Fancies - A Token of Friendship"
**********
When I saw these lovely ladies on Mrs. Staggs' blog, I thought how lucky her friends were to be receiving them. Imagine my delight when one appeared in my mailbox the other day, along with a pretty pink, white and yellow handkerchief.

Have you visited Mrs. Staggs (Lena) yet? She lives in a wonderful place named Merryville, a simple place in a simpler time. “Now while you may say Merryville isn’t a real place,” says Mrs. Staggs, “you can’t really say that it doesn’t exist.”

It is always good to pay a visit to Merryville, especially for those of use who usually reside in Grumpyville. Mrs. Staggs’ door is almost always open to visitors. When she ushers you inside, she will be wearing a soft sweater and warm socks to match, and soft faded jeans.

Last summer, we enjoyed many strolls through her delightful garden, but Merryville is wonderful in all seasons. I have especially enjoyed visiting her this winter, because she knows how to stave off those winter blues.

When you pay your visit, I’m sure she’ll offer you tea and hot buttered toast. You’ll be warmed by a cozy fire and smell the scent of hyacinths, reminding you that spring is not that far off.

There will be soup bubbling on the stove, and cookies baking in the oven. Mrs. Staggs will be working on her latest handicraft. And as the afternoon draws to a close, she will light glowing lamps and candles to ward off the dark. There, on the table by the comfy chair, you’ll see a tempting stack of books awaiting your perusal.

I have never stayed the night in Merryville but if I did I think I would find a nightgown warm from the dryer, a handmade quilt for my bed, and a sweet kitty for company.

Your portal to Merryville is http://www.ahappymiscellany.typepad.com/. It is truly “A Happy Miscellany of Fine and Frivolous Things.”

I drove out to my sister’s place yesterday, in the cold, blustery afternoon. There too, I was welcomed with the warmth of hospitality and also the warmth of a hearty knoephle (nefla) soup made by my 17-year-old niece.

Even though we are Norwegian and Scottish, we have embraced this German soup. It's very popular in Bismarck, having been brought here by Germans From Russia immigrants. In fact, if you're not from North Dakota, South Dakota or Minnesota, you may not know about knoephle soup.
Strictly speaking, the four basic ingredients to qualify a soup to be called knoephle are potatoes, celery, chicken stock and knoephle. Often called dumplings, knoephle are actually made from noodle dough.

Knoephle soup – also spelled knoephla, knephla, knepfla, etc. – has as many variations as it does spellings. Should one use milk, evaporated milk, heavy cream or half and half? Some people add chicken, ham, hamburger, bacon or sausage to this supposedly meatless soup.

I am very particular about my knoephle soup. I don’t care for the soupy (thin watery) kind. Often, the knoephle are very gummy. Until yesterday, my favorite knoephle soup in Bismarck was from a now-defunct restaurant called The Drumstick. It was suitably creamy and extra flavorful. Now my favorite is Kelsey’s soup, nice and thick with chunks of bacon.

Combine dough ingredients, roll into the shape of a pencil, and cut into ½ inch pieces. Set aside.

Boil potatoes with just enough water to cover them.

When the potatoes are done, do not drain the water. Add the carrots, onion, soups, milk, bacon and knoephle. Season to taste (because of the sodium in the soup, don’t add salt, and limit the amount of bouillon you use.) Boil for 20 minutes or until the knoephle are done.

Vegetarians can leave out the bacon, and depending on how strict they are, also eliminate the chicken-based ingredients. Although it wouldn’t strictly be knoephle soup anymore, they could substitute cream of potato or other cream soup for the cream of chicken soup, and vegetable bouillon for the chicken bouillon. 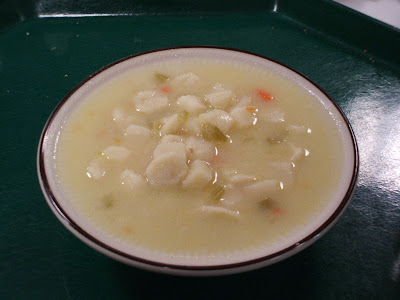 What a charming token Mrs. Staggs sent to you and then having a delicious soup, sounds like a perfect day. I think the only good thing about winter is soup.
I love dumplings, so this soup is something that I would love to try.

Hi Julie,
I visited Merryville for the first time today. You are so right, it's a lovely place. Thank you for leading me there.
That soup looks so good. Our weather forecast is for rain on Wednesday....Would love to try to make that!
xx

I adore Mrs. Staggs and always look forward to my visits to Merryville. What a lovely surprise you received in the mail and it sounds like you had a wonderful visit with your family. The soup looks delicious and perfect for cold winter days!
Hugs,
Kelli

Good morning from the uk and congratulations on your award! I'll be visiting Lena later!
Your Knoephle soup looks lovely, I have never heard of it before,must write the recipe downand give it a try!Its sunny but cold here today,just having a quiet day,how about you!Love from Kathyann and the girls

Oh yum! I've not tried this but will. I have family roots in South Dakota but they were Finn's and maybe this soup wasn't part of their menu - otherwise how could I have missed it?

I do believe we will be trying a new soup at my home tonight. It looks so delicious I can almost smell it cooking already!

that soup looks really interesting, i've copied the recipe, thanks Julie! (soup is soo comforting...) I will be off in a minute to pay a visit to Merryville, "A Happy Miscellany of Fine and Frivolous Things.” sounds wonderful to me right now

As soon as I finish here I'll be visiting Merryville....but I must say your blog is always welcoming, too. I feel your warmth and hospitality with each visit. And today we even get a bowl of soup!!

Soup the best tummy warmer in this cold Winter we are having.
Mrs Staggs does make us welcome doesn't she..!

Thank you for saying these kind words about my blog. I apprciate your thoughtfulness very much, and it makes me happy to hear that you enjoy visiting there. I apprciate these other kind words too.

Mostly Julie, I appreciate YOU! Your blog is always beautifully written, and I gives me much to think about. I've learned many new things, visiting you. Thank you.

Thanks for sharing such good things! The soup looks wonderful! What a charming ornament from Merryville! I followed the link and found out that we area bout to have a lunar eclipse!

Hi Julie! I received my book today! You are so sweet! thank you for the extra surprise. the bookmark is beautiful. I love teapots! what a wonderful surprise. I can't wait to read my book now!

That soup looks so good! Just the thing for these cold long winter times. I almost forget what it feels like to be warm outside.

Yum, Julie! this sounds wonderful and coming from you, the soup queen, I know it is delicious. And it brought back memories of soup in various kitchens.
Please stop by, you've been tagged.

This is all so comforting, warming and cosy... thank you for inviting us in! I haven't visited Merryville yet, but your description gave me the feeling of the place.