WHERE HAVE ALL THE NEIGHBORS GONE? 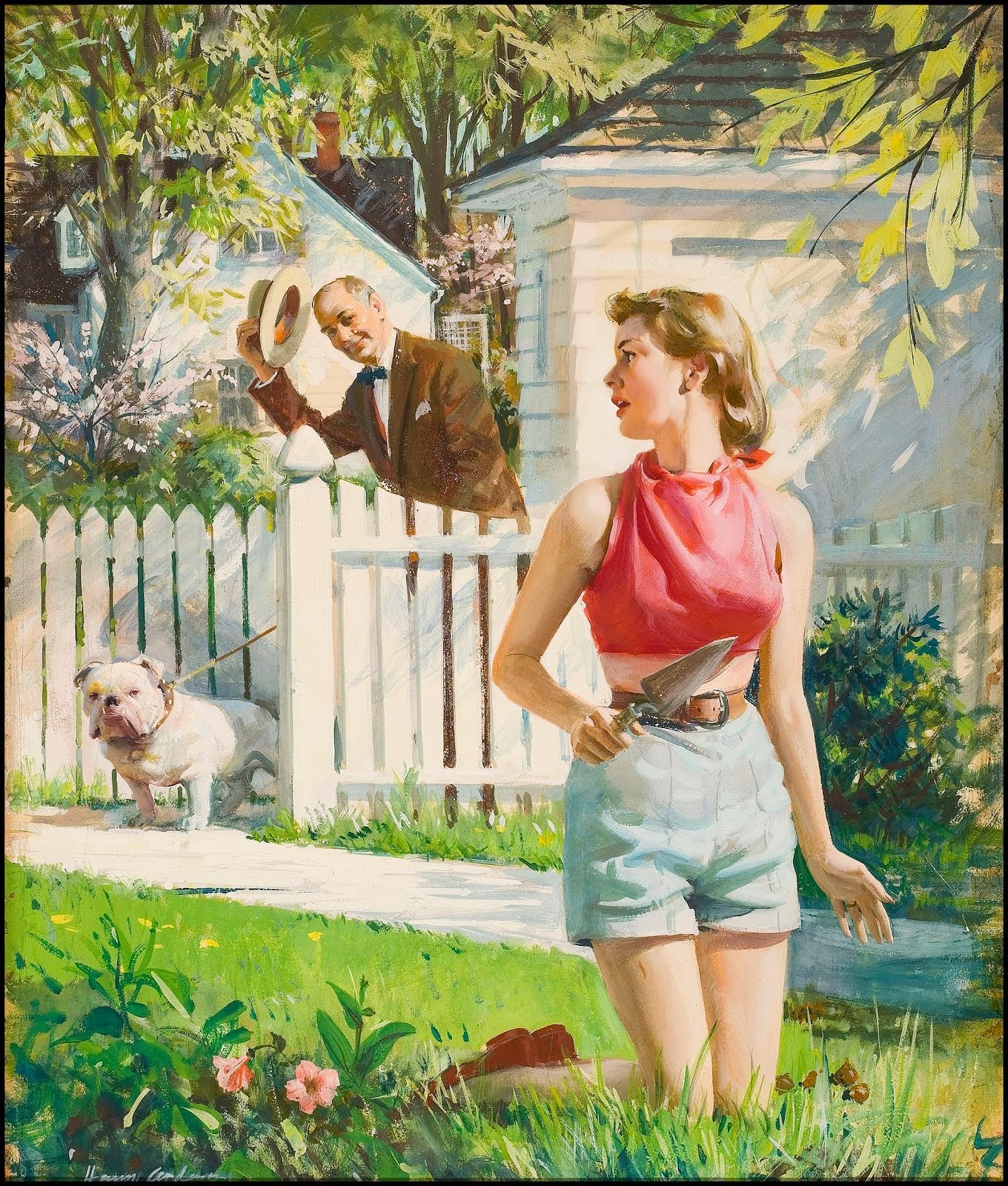 Gracie and I are finally able to go into our backyard after a month staying off the newly-seeded grass. It was a pain for both of us, having her tied up in the front yard to do her business. There was one advantage though, and that was seeing a lot more of my neighbors.

As I worked on my flowers or hung out with Gracie, many people stopped by to chat about flowers and dogs and stucco cottages. Sometimes they caught me from the back view with my butt sticking up in the air as I pulled weeds. Gracie's rope was long enough for her to pass through the arbor and go just onto the sidewalk, so she sometimes surprised walkers and - more to the point - dog walkers. Fortunately, all was peaceful.

Americans used to see a lot more of their neighbors, when house had front porches and people sat out on them. Now, everyone has retreated to their decks and backyards. But summer after summer, as Dan and I enjoyed long evening after long evening on our deck, we wondered, where are our backyard neighbors? No one was enjoying their yards! 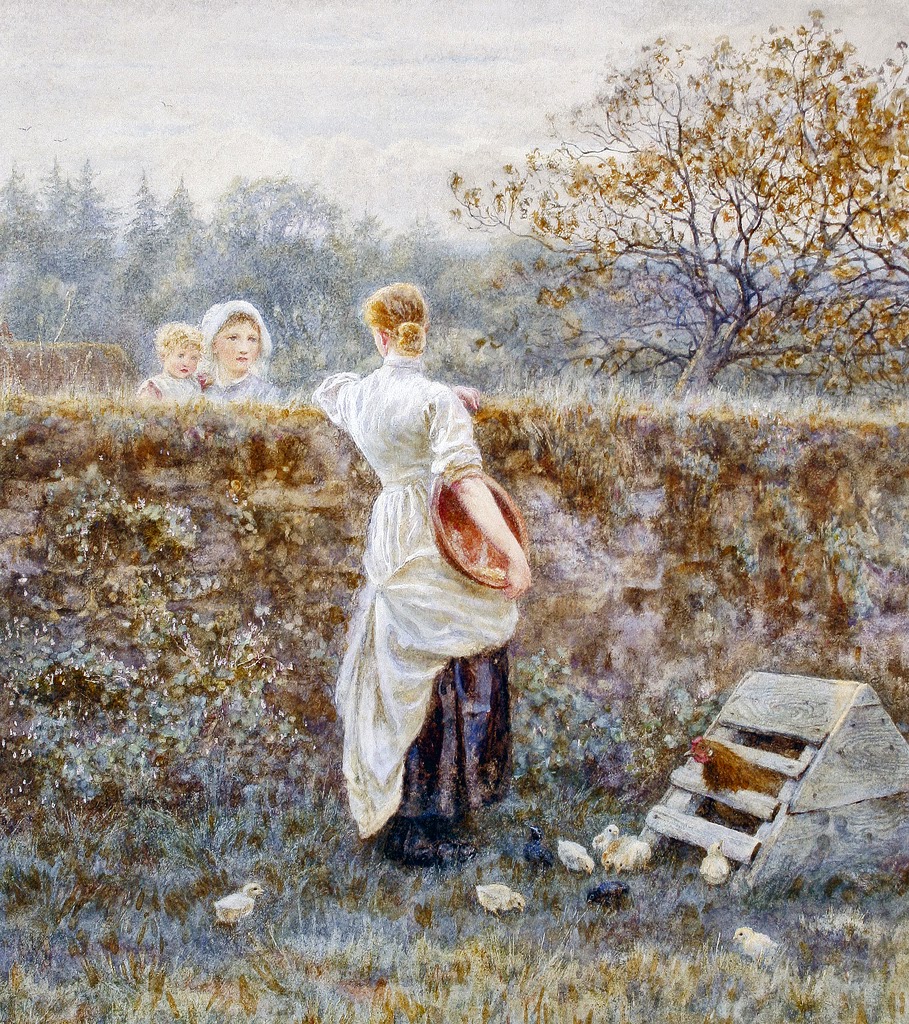 ﻿
"OVER THE WALL", Helen Allingham﻿

We moved into this house in August 1982 with infant Kristen. Now, 32 years later,  I'm alone, and I still wonder where the neighbors are.

The way our house is situated, I can see five backyards well from my deck, plus two more mostly obscured by trees. I can see another if I walk to the back of the yard. Only Jim and Mary have been here longer than we have. Their teenage daughters babysat Kristen, and their youngest was pals with my nephew Nick, who lived with us when he was 5. Over the years their five kids grew up and moved away, and they have become grandparents. We are over-the-fence neighbors, Mary and Jim and I. Mary and I chat about kids and flowers, and Jim has cleared my sidewalks and driveways since Dan died and has generally been a vigilant, watchful guy looking out for possible trouble or waiting to see if I need help with anything. 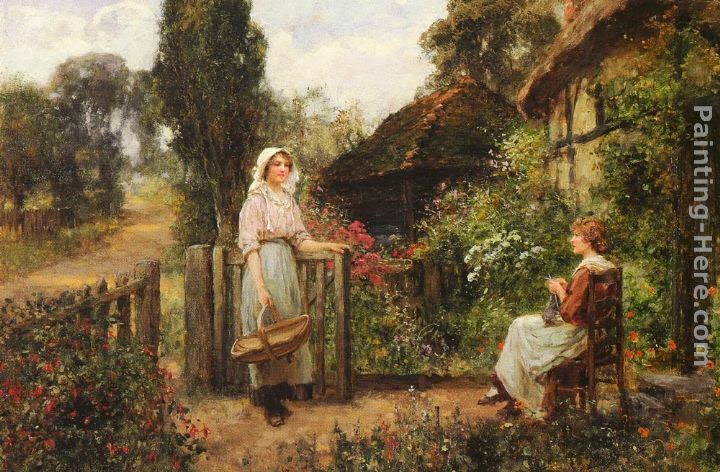 The neighbors on the corner used to spend their summer weekends at their lake cabin in Minnesota. When they sold that and started staying home, they build a tall privacy fence around the backyard.  Of the other neighbors, I have seen many come and go. Each house has had at least two owners, and one has had five different owners. Of them, most of them seemed to have been allergic to fresh air.

Back in 1982, Grace, one of my across-the-driveway neighbors, was an elderly lady who couldn't venture out. I've never seen Lynn, the new owner, use the large backyard except to walk the short path from the garage to the house. I know she likes flowers because of the red and yellow tulips she planted for spring, and the red and yellow day lilies for summer, but they are all in the front. Just think of how many tulips and lilies she could plant in the back! 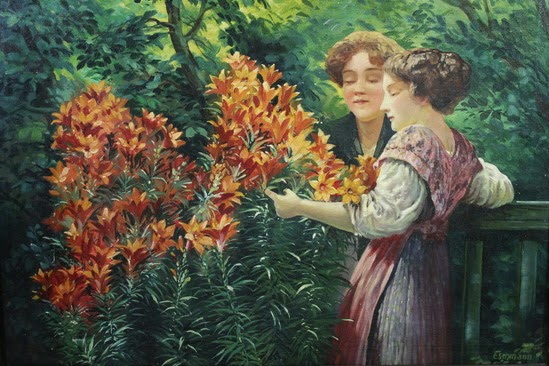 On the north side of me, Neighbor Nancy hated bugs and only came outdoors to hang her clothes on the line. Not liking bugs didn't make her an oddity, but she was certainly the only one in the neighborhood who still hung her clothes outside to dry.

In the house directly behind me, I never saw or met one of the home's owners, a single woman with a lot of kids. Only Brady and Evan, her two youngest, would venture through the line of  pine trees and come into my yard to visit with me.

Most of my neighbors have been good, thank goodness. But when above-mentioned Nancy divorced Tim, she moved out and he stayed. A former good neighbor, he began having loud, wild parties that began after the bars closed at 1 a.m. As much as Dan and I liked Tim, we had to call the police on him several times so we could get some sleep. 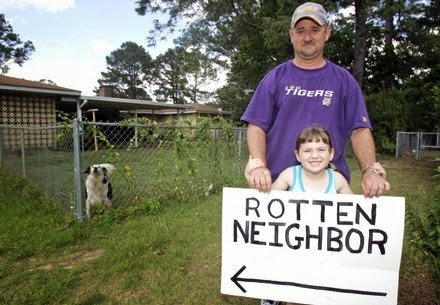 When we first moved here, the lady who owned the house behind us had a yippy little white dog.  One day that nasty thing unexpectedly came tearing under the pine trees and into my backyard, where it promptly latched onto and bit a little boy I was babysitting. Of course, the dog was quarantined. The lady had the NERVE to come to my house and bawl me out about temporarily losing her precious little Pookie  - when I had witnessed her dog bite a child on MY property!!

I loved seeing the most recent homeowners in that house. A fairly-young couple, they had about eight kids - I never could keep the count straight - something like four kids of their own and four children they had adopted from Africa.

In summers, they would have parties and bonfires, and the kids would play on their trampoline, hammock, jungle gym and swing set. Happy kid noises and adult laughter filled the evenings.

Early this summer, it dawned on me - these neighbors haven't been around in a while. The house was so dark, the yard so silent and so sad. But their hot tub and lawn furniture and kids' equipment were still there - what in the world was going on? 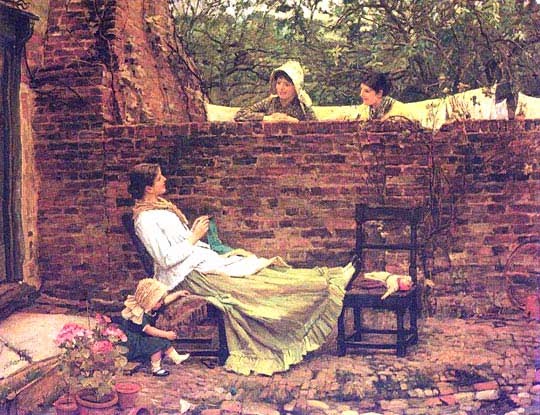 Finally, on Friday I saw the mom (also named Kristen) working in her yard. Over the back fence, I asked, "Do you no longer live here?" She explained that she and Casey and the kids had been in Africa all summer. They had expected to there be a year or longer but had to come back because they could not get the kids enrolled in school. So at least they are here for now. Happy peals of laughter again spill across into my yard, the wood smoke wafts over too, and I don't feel so alone anymore.
Posted by Julie at 12:17 PM

Robert Frost's "Mending Wall" is relevant to my feelings about neighbors. I'll be a good neighbor on my side of the fence and ask only that they be good neighbors on their side.

Gosh Julie, I came by to wish you a Happy Christmas and found this wonderful 'neighbor' post. I really enjoyed reading it.

Anyway dear - sending you good wishes for the holidays - hope you will be sharing them with Kristen.