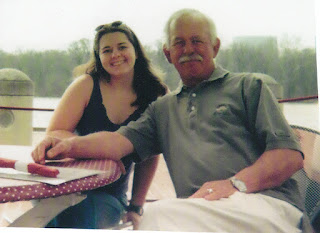 I'm so pleased to hear this wonderful news, I have been asking for healing energy for Dan every day and will continue to do so. I can't begin to imagine the relief you must all be feeling. Enjoy your Spring and Summer.

What fantastic news!! You all must be over the moon. Continued good vibes coming your way! Have a fabulous Spring, and all the best to Dan as he begins his recovery from the cure!! Take good care, and brightest blessings!

Such wonderful news..I am happy for you and your family! I have a loved one in stage 4 still in treatments..so it is inspiring to hear of someone's else good news!
Shine on..
Victoria

Oh, Super Yay!! Hurrah!! Yipee!! That is truly the best news. Now is the time to overhaul his nutrition and get him on wholesome whole foods -- fruit smoothies, vegetable soups, whole grain breads. (I just got a bread machine and I'm looking forward to whole grain flours, unbleached flours and alternative grain bread -- oats, rice, etc.) Maintaining good nutrition during chemo is a difficult uphill battle. Hopefully, he'll soon get to where he can (and wants to) eat again, and then he can start to build back his strength. Keep him hydrated with fruit juices whenever possible -- he needs the calories! **Gives BIG Hug and does happy dance!**

Bob and I just read your post and are thrilled to get this great news. Nothing could have made the day any better. Knowing that Dan is doing so well and is hopefully on the road to a complete cure eventually is fabulous!

Hug him for me - shake his hand for Bob - we've both been there as you know and we are so happy to have him in our group. Way to go Dan!

As for you sweet Julie, enjoy every minute of Spring.....you deserve it so much.

I'm home for a few weeks after the southeast Asia trip and before heading out again - so will be checking back and hope to find you posting more.

This is really wonderful news...stay well!!!!
What has changed about blogger...the people or the blogger?
Nothing stays the same forever. Arney had a car accident the 30th of March...his chest was crushed leaving him with 6 broken ribs. A man and his wife turned infront of Arney and it turned into a 3 car crash. Arney was hit by the third car also. We are blessed because the car was distroid and no one was killed. Arney is healing, and we know that it could have been so much worse. It is so good to have happy good news...Have a wonderful Spring!!! hugs, Mary

Oh I'm so extremely glad to hear it! I was missing you! I'm so happy you're all well!

yes, its thge best news ive heard all week! I am sabsolutely thrilled for you all Julie, and send my love, light, and blessings as always!

What wonderful news for you, Dan and your family. The relief is in each word you've written and singing from the screen, I'm so happy for you all and pray it continues.
Sending {hugs}
Rose H
x

And we all celebrate with you - what fabulous news! Our thoughts will continue - as you both climb the hill to good health again.

I am so happy for you and Dan. I will change the prayers for healing for Dan to prayers of thanks.

Dear Julie...
Bravo....this is the best news...I know how you feel because that is how I felt when given the same news about my partner John's being cancer free.
John and I will still keep Dan in our prayer's and thoughts and you also.
Stay well
Blessed Be!
Lawrie

Hi, Julie, I'm trying to reach Jo Ann Bayne, who talked about Causland Park in Anacortes, WA back in 2009, on your PiecefulQuilting blogspot. That park was named for my husband's family; we visited it in 2005. If Jo Ann's no longer available, please let me know; thanks.
-- Barb Cousland, Emmaus, PA couslabj471@verizon.net