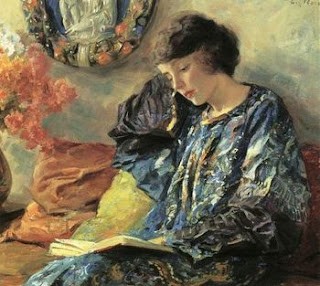 "MARGUERITE" by Guy Rose
﻿﻿I knew I had neglected my blog for far too long when I discovered today that I still had a Christmas banner atop the blog even though it has been 35 days since Christmas; and also - and more importantly - I have been receiving e-mail messages from blogging friends ranging from "What are you up to?" to - basically - "Are you still alive?"
Yes, I am alive and well. My excuse is that I have been employed since November 1 at a temporary job where I have to pound away on the keyboard and stare at the computer screen for eight solid hours a day. When I get home from work I don't even want to look at a computer. Plus, my computer sits in my living room beneath the window that holds the air conditioner, which means that freezing air flows in around the cracks and crevices, making the space quite uncomfortable.
It is so ironic to me that I finally have been working but it's been during the three darkest, coldest months of the year when I suffer so badly from Seasonal Affective Disorder. I was originally hired to work in November and December, but so far my employers have extended the position twice - first through January and then through February. As they have for the past two months, they will evaluate the position in mid-February and may extend the job even longer.
My employers are very appreciative of my efforts, which makes the frigid, dark morning "commutes" worthwhile (they are located at the east edge of the city). Not to mention the money I have been earning! And I have discovered that the 6th Street Tesoro gas station/convenience store has flavored cappuccino for only $1.42 (as opposed to Starbuck's at about $4.00 a pop.) I am quite happy tootling down the frozen streets grasping a warm mocha or almond amaretto in my hand.
I even neglected to mark my 4th anniversary of blogging, on Jan. 20. I would have gotten the date wrong anyway, as I thought it was Jan. 24! Clearly, my passion for blogging has flagged, as you will see by the statistics:  254 posts in 2007, 89 posts in 2008, 88 posts in 2009, and only 41 posts in 2010.
Have I said everything I wanted to say in the last four years? Did I get lost somewhere in my efforts to find my Celtic roots? I do know that even before I suspended blogging I had removed my "self" from my blogs, and I deeply regret that. I want to return to blogging in 2011, but am not sure quite how to proceed. It still amazes me that I continue to garner followers (197 as of today) when I haven't even been blogging for awhile.
Apparently, I am doing something right, but it still doesn't feel right to me. I am striving to find a balance in posting that exists somewhere between the actual, real, humdrum me living in Bismarck, ND in 2011, and the fey spirit who resides deep within me.
You may wonder at my choice of illustration for this post. As I did not do a year-end post, I did not have a chance to mention that I read over 200 books during 2010!! At the start of the year, I made it a point to write down every book I had read (something I had never done before). By July, having read a lot of books and having only worked during the month of May, I realized that it was quite possible to reach the goal of 200 books for the year. I never consciously chose short books, just books I really wanted to read, and in the end only a couple of books I read could be described as being on the short side.
I do admit that after I started my job in November, I read fewer books, and December especially was a challenge for me - what with it being bitterly cold and dark and with working, Christmas preparations and spending time with out daughter when she was home, I really "hit the wall", but I did muddle through and ultimately read 201 books in 2010!~
This winter, I will be devoting myself to reading the books in my TBR (to be read) pile that are the giant juicy books I have been hanging onto just for this purpose.
I hope to retire sometime in 2011. My 62nd birthday is in June, but if things work out as we plan, my retirement will be a lot sooner. Until that time, I will be trying to decide which blogging path to take.
Posted by Julie at 10:21 PM

Good to see you back Julie, being employed must have helped to cheer up Christmas a bit:) Even with the SAD.

We are of an age, then, if you will be 62 in June. I'm a month older than you -- LOL! I'm going on SS but that's because I'm barely keeping my head above water financially. Even after I start getting SS, I'll have to keep on working, but at least money won't be so dreadfully tight. Hopefully, I'll have more time to blog and follow blogs. I look forward to whatever direction you choose to take. People tend to blog about what's on their minds, and that's always interesting.
WOL(8>)

I was happy to see a post from you on my blog list. Hoping you can find a way to blog again, because you have such a wonderful blog. Good luck with your job, and commuting in wintry weather. wishing you happy book reading, and blessings to you and yours. Robin.

So good to see you back - and what happy news that you have been able to get a job and appreciates you. I look forward to seeing more about your life - I love that kind of post the best - though your informational ones are exceptional.

Hope winter is not to hard on you this year.

Congratulations on your new job - (temporary or not - I'm sure it's a good thing.) Your blog is always beautiful - ALWAYS - and, when you have time to share - you light us up.

Hi,
It was so good to stumble across your blog this evening and I have so enjoyed peeking at all the posts,
Loreena McKennitt, absolutely one of my favorites ... her home town is not to far from here. We are from the east coast of Canada originally so our celtic roots are often showing.
Very best wishes,
barbara

I am late in reading this post.
I am blogging less myself. It is still addicting tough!
I am amazed at how many books you have read (well, maybe not)!
We are snowed in down here, record snowfalls.
I'm scrolling up to read your post about St. Brigit.

I'm so glad I stopped by this morning and found you back again Julie - I certainly missed you during the long, cold (yes, even here in the south) Winter.

Happy to know you've been appreciated at your new place of employment...........but hope you are able to retire and take it easy soon.

Wow, that's a lot of books and many hours of reading..........
Hope Spring arrives early in ND bringing warmer days so you can enjoy the outdoors - know your Winter has been brutal.

I love your blog! How do you post pictures of your books in your pile to read?
www.flamingogypsy.blogspot.com