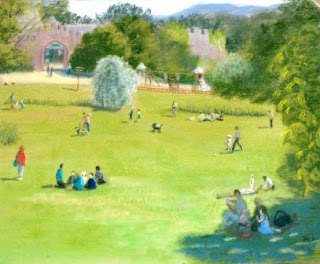 "SUMMER'S AFTERNOON AT MINCASTER" by Dot Gould
Summer 2010 has been wicked for North Dakota. In August alone, we've had many days of temperatures in the low to mid 90s accompanied by very high humidity. This combination makes for an extremely unsettled atmosphere, and we have had numerous thunderstorms. This summer the weather service has issued twice as many severe T-storms warnings as it did last summer  - over 300.

We've had a number of nasty tornadoes across the state too. Just in the past week or so, we've had three F-4 tornadoes (F-5 is the highest on the Fujita scale) that destroyed farmsteads in eastern North Dakota and western Minnesota. Here in our TV viewing area, we've had three deaths from tornadoes this summer. That's almost unheard of. 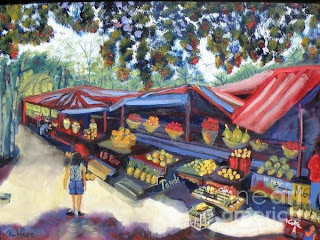 "POLOMOLOC FRUIT STAND" by Rob Hare
Our meterologists tell us this violent weather is due to a devilishly capricious La Nina. All this steamy weather, more suited for Louisiana than North Dakota, has led many of our residents to wish summer was over already. But I would never wish such a thing. Really high temps and high humidity - leading to "The Sticky Factor" - those I can definitely do without. I can't sleep at night, I feel sick to my stomach and my knees hurt. But wish summer over? Never!
What is the rush to usher summer out so quickly? We Nodaks pined, we ached for summer last January and February. We greeted it with enthusiasm when it arrived in June, delayed as it often is. Aside from storms, July was heavenly. And now, in August, people want to boot summer out the door. It's as if we anticipated getting together with a warm, carefree, tender, casual lover for months. But now we're already tired of her and want to get replace her with autumn. Sure, summer was tempestuous at times, but what sensuous, voluptuous, passionate female isn't?
Although she is a vibrant and glamorous seducer, autumn is more austere, way cooler in demeanor and sometimes quite harsh in aspect. 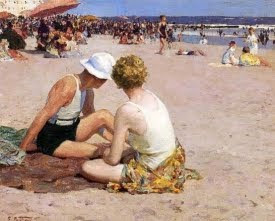 "SUMMER VACATION" by Edward Potthost
So here we are in August, which people (mostly advertisers) have conspired to turn into a lame duck month. It's as if August can't be a summer month any more. The newspapers and TV bombard us with back-to-school ads. There are already football games on TV. We have to endure yet another silly season of Bret Favre toying with the Minnesota Vikings.
The stores are jammed with fall and Halloween merchandise.  You can't find any summer clothes on the racks - they're full of jackets and sweaters. Ads for air conditioners have been replaced by ads for furnace checkups, ads for lawn mowers by ads for snow blowers. I really feel as if I am being bashed over the head by the harbingers of fall.
Yes, there are signs that fall is on the way, but they are more natural, and subtle.
There are a few yellow leaves scattered across the lawns.
The evenings are cooler.
Darkness descends sooner.
You can't eat outdoors without being bothered by yellow jackets and flies.
There is mist on the car windows some early mornings.
The cricket orchestra tuned up about the first of August.
Apples and grapes are ripening.
The zucchini - like kudzu vines in the South - are taking over the world.
The goldenrod and asters are in bloom. 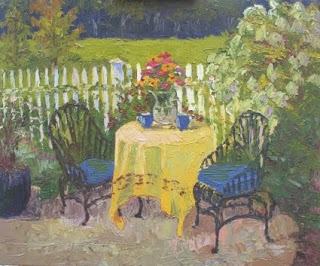 "SUMMER AFTERNOON TEA" by Roxanne Steed
But like I said, these are subtle signs, and I wish they were the only signs being transmitted to us.
I say it's time to rebel against the fabricated onslaught of autumn! There is still time for summer, still time to let August to be August.
There is still time to:
Bring your sand pails along to the lake.
Enjoy an inexpensive smoothie at Mickey D's. It won't sound so appealing in November!
Go to the beach a few more weekends.
Find a shady nook in the back yard and read a book.
Fix up a little table with a colorful tablecloth and set out lemonade, cookies and fancy sandwiches (the kind you usually never make).
Cut an ice cold watermelon into semicircles, dive in up to your nose and chomp away, letting the sticky juices run down your chin.
Slice some lush, ripe peaches and drizzle them with cream and sugar.
Take your kids fishing for crappies. It doesn't matter to them what they catch, it just matters that they catch something.
Attend a craft fair or summer festival.
Go out into the country and pick a big bouquet of wildflowers. (See Re: goldenrod and asters.)
Visit a farmer's market or fruit stand and buy as much as you can comfortably afford. Make a meal entirely out of fresh fruit and veggies!
Give your tired flowers some fertilizer and the tender loving care they deserved ALL SUMMER LONG.
Go to a state fair (ND's is over but the huge Minnesota State Fair is over Labor Day Weekend). It's the best picture of Americana you can find these days. Have a deep fried Snickers on a stick - or anything on a stick - on me!
Take a drive through the countryside and just inhale the scent of crops being harvested.
Find a pool of water and immerse yourself in it. 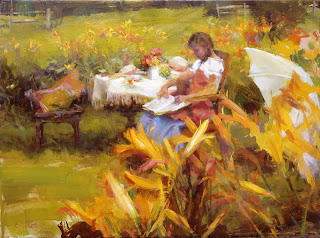 "SUMMER STORIES" by Carol Arnold
Don't let August be a lame duck. The Victorians used to rent beach cottages for the entire month, with the wife and children staying there the whole time and the busy husband relaxing there on the weekends. As far as I know, France still practically shuts down for vacation in August.
Ironically, I have been unemployed most of the year but am now working this month. But I am still finding time to savor the gifts of summer before they fade away. Because I know that it won't be all that long now before I'm gazing out my patio door at a world made entirely white, and dreaming of that same view when it was a wall of green. 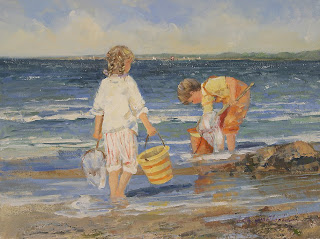 "SUMMER AFTERNOON OLD GREENWICH"
by Sally Swatland
Posted by Julie at 6:41 AM

I confess that I am among those waiting for autumn, August has always been my least favourite month - the only place to be in August is by the sea and I can well understand people taking a house on the coast for this month. Having said that, in the UK we don't get the aggressive advertising for autumn that you have in the US so it is still possible to buy summer clothes and enjoy August as a summer month - or it would be if the sun would come out:)

I have never, ever been a fan of summer. Even as a kid, I couldn't wait to get back to school, couldn't wait for the misery of the heat and humidity to subside. Autumn has always been my favorite season too. A few days ago, someone said summer was in its last days and I had to remind them that we were merely half way through summer. Autumn doesn't begin until 9/21. I wonder why people think that when 8/1 arrives, the summer ends.

But long for autumn, winter, and spring I do, Julie. I just cannot stand summer. Never could. I'm a true northerner, that is for sure.

I'm with you - I never wish summer to be over - and of course it doesn't hurt that we live in the nearly perfect summer place - the PNW - pleasant temperatures (low to mid 70s), sunshine and long days. But then our winters are not bad either - a few weeks of snow - sometimes only a few days at a time and a few inches - hey, come on over, we'll share.

Your summer list is wonderful - and the paintings great - thanks for a wonderful look at summer.

A wonderful post! To everything there is a season and we can enjoy NOW! I love the list of summer things you can still do!

Like Rowan, I love autumn best and I am quietly gleeful to see signs of her arrival here- I posted some photos last week of my woods, showing the first subtle signs of the seasons turning. Here in the Uk we dont get such extreme weather as you do Julie, although last winter was a bad one by our standards. Maybe if we had the weather you do, we would feel differently!

We will be enjoying summer here well into the winter months. I like it hot
but dry. Glad you are embracing August,but embraces are really sticky this month so no hugs. Just lots of love
;-)

I love summer, always have, but Autumn may be my favorite. Summer means being outdoors in the evening and watching the sun go down. Summer is Birds coming into our yard, sometimes it is a afternoon party that ends when the sun goes down. Fresh fruit, tomatos growing in the garden. Cold lemonade. Vacation somewhere special. No ice on the roads. The country Fair, Art in the Park, Hide street fair, the Flea Markets in every little town. Shorts and Flip-flops. Staying up late because the sun is still out...yep, I am a summer girl. As far as the heat goes, we have air conditioning if it gets to hot. I was one of those Moms that hated for school to start when the kids were growing up. So much we wanted to do, so little time.
Loved your post...Hugs, Mary

back again to visit your summer blog and images.
We have a dry, cool day here...loving it!

hi! I'm your new follower. I too, love reading and anything magical and mystical. I stumbled upon your blog whilst researching books by Mary Stewart and was delighted to find that we both love the same books :)Especially Rebecca by Daphne Du Maurier. I also loved the fact that u mentioned anam caras, which I think is lovely. I always pray that I will find more anam caras in this lifetime.. Thanks :)

I'm glad to have found your blog.

After moving from Northern California (where we had the coldest summer in 40 years) back to North Dakota where I grew up, the warm bright August days made me feel welcome.