THANKSGIVING - WE DID IT OUR WAY 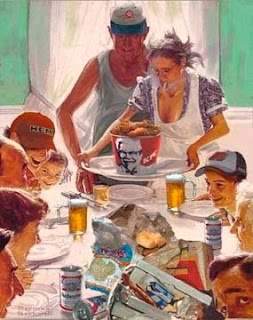 It's a funny thing about families. We have traditions that no one better mess with. Take Thanksgiving Dinner, for example.

Some people have their Thanksgiving Dinner as early as noon or 1:00. Some like it later in the afternoon. Others, like us, have it for their evening meal (we used to be a "Dinner at 4 p.m." family but somehow it got put on the table later and later every year, so we finally admitted it's not going to be earlier than 6 o'clock.)

It seems that once a meal time is decided upon, it is set in stone. The same holds true for the menu. My family sticks to pretty much the same one year after year. There's been one phase out, and one minor substitution, one "might or might not serve it depending on how we feel", but that's about it. Here's what's on a typical Fredericksen-Fagerland Thanksgiving table: Roast turkey, mashed potatoes, gravy, stove top stuffing (dressing), scalloped corn, French's green bean casserole, dinner rolls, whole cranberries, lefse, and some sort of pie, ice cream optional. 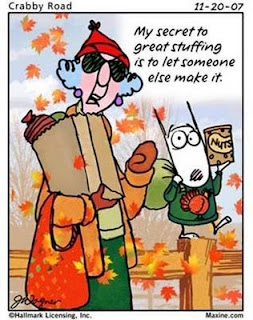 For years, I used to make New England Yam Bake, which involves ringing yams with pineapple slices and covering them with a mixture of brown sugar, butter, flour and cinnamon, topped with pineapple juice and chopped hazelnuts. At the very end of the baking period, the dish is covered by marshmallows and broiled for a few minutes. I finally realized that other people were eating this dish only out of politeness, and I wasn't that much of a fan of yams, either, making the dish just for the nutty, sweet topping.

I think the year I quit making the yam bake was the year after my 1- and 2-year-old great nephews, Riley and Bailey, got into the marshmallows, giving them a terrible sugar high. The next day, I discovered that our cocker spaniel, Lady, was covered by a sticky mess which turned out to be marshmallow goo put there by little fingers.

If my sister has to work, I skip the green bean casserole, her favorite. Sometimes we make dressing, but if we forget it in the melee, no one seems to mind. Anyway, nothing could ever top my mother's savory turkey dressing, which she made in a separate pan. That gave it great appeal to me, as I have never like dressing that's been stuffed up a turkey's butt.

We used to bake crescent rolls, but they always burned on the bottom, so we switched to brown and serve rolls. Everyone likes them better. Lefse is a Norwegian thing (it's like a tortilla, only made with mashed potatoes) and is the signal to us that the Christmas season starting. Kristen, when she was home, could always be counted on to have some lefse, as did her cousin Nick when he lived in Bismarck.

For dessert, we used to have the traditional pumpkin pie but gravitated to kinds we like better. When it's my turn to furnish pie, I feel no shame in going to Perkins and purchasing their caramel apple pie. If it's Glori's turn, she brings a yummy Fruits of the Forest pie.

We have absolutely no desire to tinker with this menu. But judging by the multitude of Thanksgiving menus and recipes on the Internet and in magazines, there must be a great demand for "something completely different".

I know there are many variations on our menu across the country. For example, some Italian families serve lasagna or other pasta on Thanksgiving, which I find extremely odd. But then again, they probably consider our choices odd. It's like making chili - everyone has their own recipe which is not only THE BEST but also THE ONLY POSSIBLE ONE.

I'm sure some people think it is a sacrilege not to have pumpkin pie on Thanksgiving. My  mother-in-law would never have dreamed of not serving it, along with her ultra-rich pecan pie, so sweet it made your teeth hurt (but good!). Squash is about as traditional a Thanksgiving side as you could have, but we never consider  it. There are some people who put oysters in their stuffing. Ewww! And what's up with mac and cheese on the Thanksgiving table?

People would probably ask us things like: "You don't use the giblets for your gravy?" "What, you don't like turnips or parsnips?" "You're not serving a green salad - can't you have just one healthy item on the table?" ("Nope, nope and nope!")

Do you like your turkey deep fried or brined? Or do you substitute tofurkey or turkducken? Do you serve bread or corn pudding, glazed carrots or Brussels sprouts, collard greens, sausage or cornbread stuffing,  riced or gratin potatoes, pumpkin cheesecake or sweet potato pie? Whatever traditional or new dish is on your Thanksgiving table this year, do enjoy.

PS - Check out this great link entitled: "5 Dishes I Wouldn't Feed A Dog But I Do Eat To Be Polite At Thanksgiving: http://www.blogher.com/5-dishes-i-wouldnt-feed-dog-i-do-eat-be-polite-thanksgiving. I can't believe there are that many people put off by cranberry sauce! I love it myself.
Posted by Julie at 11:52 AM

Everything you say is so true in our family. We also went from late afternoon to evening, sometime after 6 pm. I've given up my creamed onions in favor of gondulas and rice which has become a new tradition thanks to my Dominican husband. We also have the brown and serve rolls. I used to buy The Mrs. Smith's frozen apple and pumpkin pies, and up until last year, they were two for $5. This year one was $7.59 so that's out. So, we have started a new tradition...My youngest son will pick up and buy dessert.
Mary

Julie, I sure do love Thanksgiving dinner myself and I rather look forward to making it here one day. Alas, the bad part of that is that it probably won't be until after my mom is no longer here. But that said, the family times, the aromas, the excitement and anticipation of Christmas...All joys I have never lost! And to me those sweet potatoes (or yams) sound absolutely delightful!

So funny!!! Well this year we are eating at our middle son's house and his "about to be CAJUN In-Laws and Matriarch Grandmother" will be there...
They have their "own" foods and I have mine...more Midwestern....so I told the other Mother..."you bring yours and I'll bring mine because we aren't duplicating anything"...HA! We will see "what" gets eaten.
I do like Cajun food but at Thanksgiving I am Midwestern still.....for the most part.
Have FUN!
Oh...my husband and sons will be hunting EARLY too until the afternoon...then we will go for dinner. So I can relate.
It's never bothered me though that they go. I am happy for them actually to be able to hunt...
I think it's bothering the little new "Fiance" a bit though.
I had to reassure her that it was all good.
HA!
Have a GREAT day!

I think most people stick with traditional foods for the holidays, I know my menus at Christmas are pretty much set in stone. Hope you have a very Happy Thanksgiving anyway. I confess that the thing I'm always most thankful for is not having to cook two huge celebration meals inside a month - no Thanksgiving in UK of course:)

Julie,
I would like to wish you a very Happy Thanksgiving!
Blessings ~Mary~ :-}

We have the traditional foods - all home made because in our family we all love to cook. I'm about to make the stuffing (in a crockpot - it works great) and the dinner rolls. Tarts and turnovers were made last night. We'll eat at our oldest daughter's house around 3 - or 4 - or whenever that turkey comes out of the oven.

Happy Thanksgiving, Julie!
I love reading allyour thoughts on foods and traditions!
i made a turkey breast in the crockpot and we had the most quiet holiday we have ever had! It is truly a blessing to have some quiet time!
I even did some paintings! Now goofing off and reading blogs!LOL!

You certainly are a "Thanksgiving Queen" dear Julie. So many Thanksgivings have brought you the finest memories and it's good of you to share with us. I laughed a lot and think any one of them would have been fun to attend. I used to cook all the traditional dishes and even a turkey despite being vegetarian. Now we go out to eat if not invited somewhere! The meal we had in Alexandria yesterday was so good........even though my plate had salmon!!

Thanks for all those kind comments - I always enjoy hearing from you. Had forgotten Kristen is in Alexandria - lucky her, it's a great place to live, other than the traffic!

We have very similar dinners Julie. Minus the corn and plus the yams and we are twinning here. I noted a comment from another post and the shrinking family and I realized that this is becoming a norm at our house too. My brother and sil were elsewhere. Mom and dad are gone. Q and Erin are in Oregon. Krista was with us, thank goodness. If Chad had been home, we would have missed her too. My friend Elaine joined us at our table so it was a nice afternoon for food and friends.

Julie got a kick out of the first image w/ the KFC being served and the mom w/ cigarette hanging from her mouth!!!Not the traditional feeling is it!
Wishing you a Happy Thanksgiving weekend filled with Love and blessings of family. I have not been visitng much as of late..saving energy for healing.Think of you often. love and light aNNa xo

I think our family must be very traditional, and we do have the family favorites that are to stay the same. thank you for this post my Dear Julie. I found myself wanting to tell you about all our stuff...
Happy everyday, Mary

I'm so late getting here but it's because I ate too much on Thanksgiving! We had 14 people for dinner this year and we pretty much serve the traditional dinner. I do change up the vegetable dishes from year to year. And everyone loves pumpkin pie so we have that plus other kinds of pie and this year I also made a cheesecake. We had sugar over-load for sure!!!

so many thoughts in my head with this post...
just let me say this past thanksgiving has been one of the best in my life and there was no turkey involved ;-)