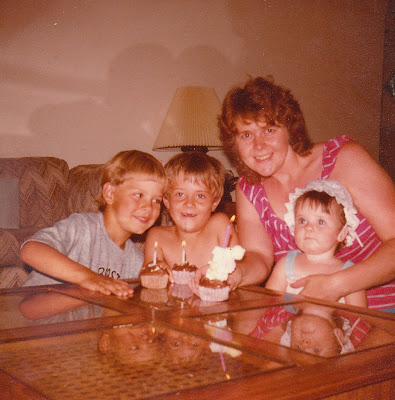 Today, July 9th, is Kristen's 27th birthday. Happy Birthday to my Darling Daughter! The last time we were able to celebrate Kristen's birthday with her in person was her 21st birthday. She now lives in Virginia (metropolitan Washington, DC). It's been hard being away from her and seeing her so seldom (only at Christmas, usually). It's especially hard to be separated on the special days.

So today I celebrated the day by remembering the day of her birth, as much of it as I can. Because she was a footling breech, I had a scheduled Cesarean, so I wasn't in pain before the birth, and was awake for it, but shortly afterward (still during surgery), the saddle block anesthetic wore off, so the rest of the day was spent in a haze of pain.

Subsequent birthdays were much better for me, LOL! I looked through a bunch of early birthday party photos today. The photo above is of Kristen's first birthday, with me, her cousin Nick (second from left) and his friend John. I also made a large cake, and we have the requisite photos of her with a face full of chocolate cake. (We had no idea how to celebrate a first birthday! That evening we had another couple over for dinner and they brought her a card with a dollar. She, of course, had no idea what it was all about.) 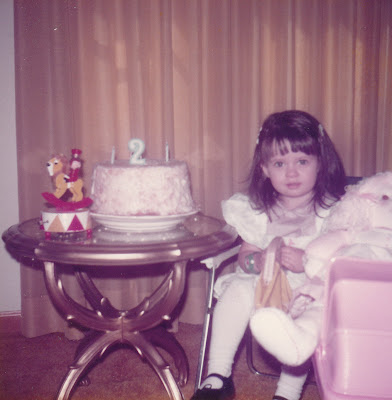 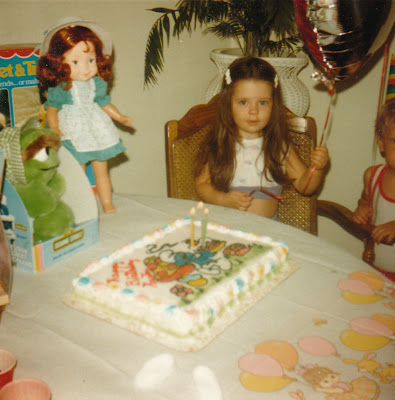 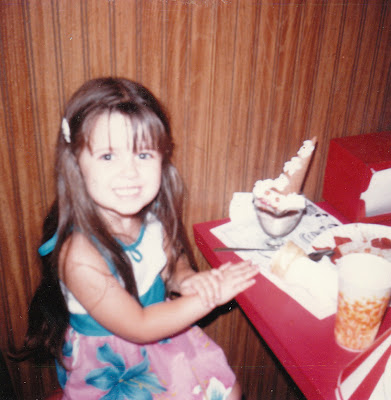 For the fourth birthday, we went to Happy Joe's pizza and ice cream parlor. I don't know that I would do THAT again (I was the chauffeur/chaperon for all the half dozen kids who attended!) Kristen is sporting what I call her "Cheesy Grin", which she always produced when I told her to "Smile". 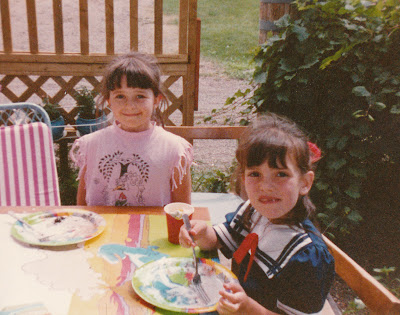 For the fifth birthday, we were back to celebrating at our house. It was a gorgeous day and we put the folding table out on the lower deck. I think the cake for this one was a "My Little Pony" ice cream cake. This is the only birthday we recorded with a video camera. Well, partially recorded. The "On" button was left on while the camera languished on the deck, and so we got a lot of "dead" film.
The little girl on the right in the photo had long, long dark hair and bangs too, and looked very much like Kristen. It so happened that they had the same tops, and sometimes, from the back, you couldn't tell one little girl from another. 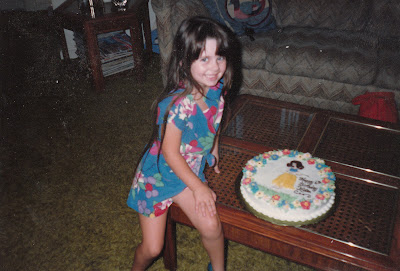 We had a tropical theme for Kristen's sixth birthday. All the kids were asked to wear tropical type clothing, if they could, and bring swim suits. Once again, it was a beautiful day and the party was held outside. That's the nice thing about summer birthdays - you can fill up the kiddie pool or turn on the sprinkler and let them run and scream to their hearts' content.
Kristen, I hope you are having a wonderful day and received our presents.
All our Love,
Mom, Dad and Gracie
Posted by Julie at 1:16 PM

What a sweet post Julie. And, you have given me a brilliant idea. I'm going to put together a collections of pictures from Krista's birthdays growing up and give it to her on her next birthday, her 25th, in November. Thanks!!!

What a lovely daughter - I think she looks a lot like you. Wonderful photos - what memories you have.

oh, such precious memories immortalized by the photos. shouldn't we be thankful camera was invented?
iam sure she will be thinking of you on today...
xoxoxoxo

What wonderful memories! I know that it is hard being long distances away from our daughters!
Happy Birthday to Kristen!

Oh I hope Kristen had a happy birthday! What a darling little girl she was!!!She is the same age as my daughter Samantha. I totally know all about those My Little Pony and Smurf cakes. Can you believe how fast time has gone? It seems just the other day they were little.

Yes, Gemma - My Little Pony, Smurfs, and how about Strawberry Shortcake, She-Ra and He-Man, Care Bears, trolls and Cabbage Patch Kids? Kristen called the CPK "Pie Patch" and was so upset that she got a BALD baby.

Oh a very HAPPY Birthday to your Kristen from Baton Rouge!
I've been wondering about you up North Julie..
My life has gotten very busy suddenly....well within the past few weeks actually. HA!
So I've been a bit "out of the loop"....but I am thinking of you from afar.
Hang in there!
We must catch up sometime soon...
Be blessed,
Joyce

a very happy birthday from across the oceans too

what precious memories. it is so hard when a child lives so far away is it not. i get to see my daughter a little more than you do & find it so sad whenever she goes back home or we leave hers. but i was once told it is a good sign, it means we bought her up with the courage to move away & be independant.

Lovely set of photos and memories, I hope Kristen had a very happy day on her birthday.

Happy Belated Birthday to your daughter. We just had one of those summer birthday parties this past weekend. Keenan turned 6 and we had the kiddie pool, sprinkler, and 500 water balloons. Love Hugs and Blessings