AND THEY CALL IT LILAC LOVE 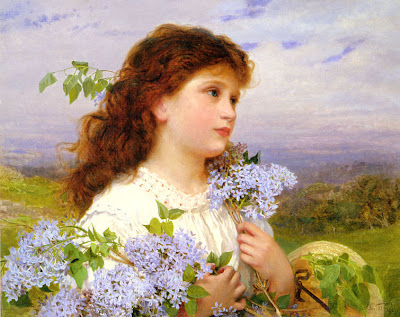 "THE TIME OF LILACS" by Sophie Anderson
Is there anyone in the world who loves lilacs as much as I do? Well, apparently painter Sophie Anderson did, as evidenced by the paintings above and below. How we love to pick lilacs, all the while knowing that they do not last long as a cut flower. But there's a lot to be said about having a vase of lilacs by one's bedside while drifting off to sleep. 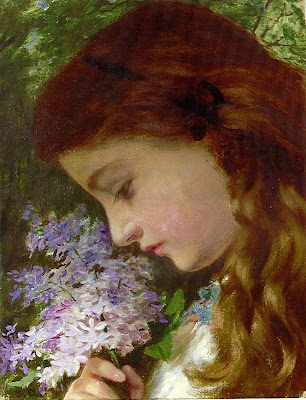 "GIRL WITH LILACS" by Sophie Anderson
I must declare, the best time of the year to live in North Dakota is the last part of May and the first part of June. The flowering fruit trees are still in bloom, though some pink and white petals have begun to drift onto the streets and lawns.

The dwarf purple iris, my favorite of the entire iris family, has exploded into rich purple velvet ecstasy. Any bleeding hearts which have been sheltered in warm nooks are nodding on their long graceful stems. A few late tulips are still abloom, some appearing very blowzy, as in Old Masters' paintings.

My sturdy-stemmed lavender irises will soon bloom, and the bridal veil spirea bushes - so nondescript the rest of the year - will be turned into plumes of foamy white. Then the peonies - talk about blowzy ladies - and the sweet yellow shrub rose, and the almost-too-proliferous lily of the valley. I can't wait.

But there's no need to be impatient, as the lilacs are out!!!! The very air is heavily perfumed. It is almost too heady as it assails a person walking out the front door of a morning. It certainly does unsettle the brain and render one utterly useless as the glorious scent is inhaled and all thoughts of practical life are left far behind.

I had lunch at a certain restaurant today SPECIFICALLY because the exit road is lined with lilacs. I parked my car, got out and spent a good 10 minutes sticking my nose into lilac blossoms. And I did not care one whit what people thought of me. In my yard I have an ancient lilac tree which I cut way back to discourage it from blooming only on the highest branches. However, it still has this problem, and yields precious few blooms to boot (it is just too shaded). I am going to try to go walkabout the neighborhood on a lilac quest, though my knees - yes both knees - are giving me problems.

Around here, lilacs seem to be used quite often as hedges. I'm not used to that but I think it is delightful. A little building that used to be a family home but has recently housed various small shops abuts onto the Broadway Dairy Queen property. An enormous hedge of lilacs sits at the west edge of the property, blocking out the DQ parking lot. I think a visit to the DQ is imperative, if only to sit in the car and indulge in a sniff-fest (okay you know me too well, I will probably have a chocolate-dipped vanilla cone too).

Now in my third spring of blogging, I think I have said as much as I can about lilacs, so I am just going to post links to the 2008 and 2007 posts. For the 2009 post, I will just trot out a very few sentiments about lilacs that my long-time readers already know.

Lilacs are my favorite "Marcel Proust" sense memory flower. A whiff of them takes me right back to my childhood.

And of course, I can't write a post about lilacs without trotting out a few lines of Amy Lowell's poem that goes "Lilacs in the dooryard, holding quiet conversations with an early moon" and Walt Whitman's "When lilacs last in the dooryard bloomed" which is really not about lilacs but about Abraham Lincoln.

However, Whitman's imagery touches me deeply because so many abandoned North Dakota homesteads still have lilacs blooming by the foundations, and because so much of my early imagery of lilacs was seeing those purple and mauve blossoms framed by old, silvery-grey, weathered wood.

Here are my lilac posts from the last two years, which are basically the same except for a little bit of different baggage each year (you will get the essence from just one of the links - no need to link to both except I may have used different photos!)

I hope that where ever you are this spring, you are able to participate in the sensual feast of the blooming of the lilacs. 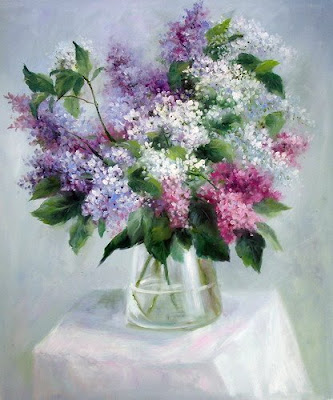 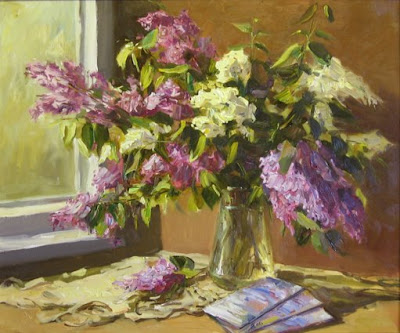 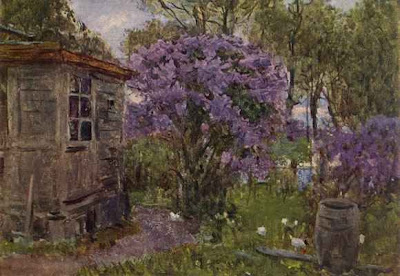 This is my absolute favorite. Could the scene be from some old Russian country dacha? 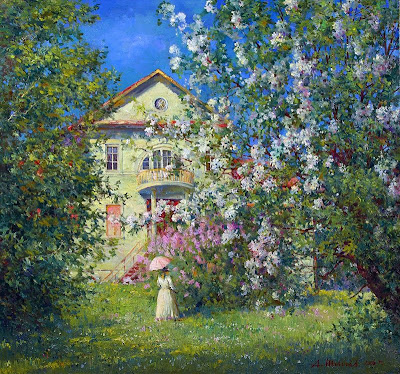 OH what gloriousness - I can smell the lilacs through your words. My favorite painting is the one of the lilacs in a vase, the first "Russian" one. Thanks for the lovely flowers.

I love your lilac posts. And I love lilacs, too. There are none where we live and I miss them. Your words brought back all my memories of lilacs....thank you. And the paintings are beautiful!!!

The scent of lilacs is wonderful isn't it? I love the first of those four paintings that came from your Russian friend - just beautiful.

Their fragrance is as heady as they are beautiful.

Very pretty!
While we were in Gettysburg this past week, one of the tour guides told us that lilac was used to mask the smell of death in the days following the battle..
That and peppermint because they have such a strong smell.

Lovely lovely lovely. So good to see you happy and enjoying the lilacs. I can see you with your nose in them.
:-)
Take an extra whiff for me. We don't have lilacs here.

All of the paintings are lovely and especially that last one. Absolutely beautiful post! Yes, I think I love Lilacs as much as you do ♥ They are so pretty and fragrant. I wait for them to bloom every spring. Then I put them in vases all over my house.

Lovely lilacs!
I just gave your blog an award!

Check it out here:
http://sha-shajewelry.blogspot.com/2009/05/one-lovely-blog.html

Oh.......my husband and I love Lilacs and REALLY miss them. We don't have them down south here. Nor peonies.....miss them too.
Thanks for showcasing them. Makes me miss their scent and beauty!

Beautiful paintings, Julie! Thanks for sharing them. I've been indulging in my lilacs for a couple of weeks but they're sadly now fading. I don't think anything comes close to their delicious scent!

Enjoy them as long as you can!

The lilacs are all in bloom here too. We went for a drive yesterday, and I had my window down. The smell of blossom as we drove along was so strong. The paintings you have chosen here are beautiful.
hugs
x

Lovely lilacs! Only wish we could grow them here but I think it is too sweltering hot. *pout*

Thank you for the beautiful pictures you have posted.I can relate to the lilacs,I'm from Bismarck ND also.I picked a bouquet the other day and delivered them to my Mother.I've been out walking,and oh the smells of the flowers is like heaven or so I hope it is when I get there.

I love all the lilac paintings!
My grandmother had a lilac bush beside her home on the Oklahoma plains. I remember playing under the branches when I was very small!